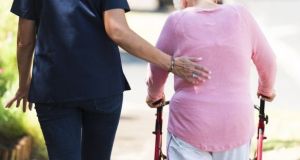 The new study found the 82 per cent of people would like to age in their own homes.

Just one per cent of older people want to age in a nursing home or long-term care facilities according to a report by Active Retirement Ireland.

It found the majority (82 per cent) would like to age in their own homes while 17 per cent would opt for sheltered accommodation or a retirement community.

One in three older people believe they will not be supported to age at home or in the community.

Active Retirement released The Right to Remain report ahead of its 2017 AGM on Wednesday morning.

The group is the national representative body for 500 Active Retirement Associations throughout Ireland, with a total membership of over 24,000.

A survey within the report involved 100 members, with the majority aged between 50 and 74.

Peter Kavanagh, head of communications with Active Retirement Ireland said: “While it may seem obvious that Irish older people would prefer to age in place than to move to a residential care facility, it is significant that only one per cent of respondents would actively seek a nursing home setting.

“What is worrying is that the Irish model of care is clearly driven by an outdated, custodial model that does not cater for the 99 per cent of older people who would rather age as part of a socially inclusive community - be that in their own home or a dedicated setting such as Cluid Housing Association’s ‘Extra Care’ model or Dundalk Netwell Centre.”

Respondents were asked about their concerns about growing old in Ireland. One respondent said “unless you live in a city, access to services is very patchy”.

“If you can’t drive, or have someone who can drive you, it is impossible to get to appointments, social gatherings etc,” the respondent said.

“Because of the lack of jobs some are left on their own because families have had to leave Ireland and therefore do not have any family backup. The outlook is bleak indeed.”

The report states that a “holistic approach to ageing” is required, with focus on investment in services, communities and infrastructure, as well as the financial and personal security of older people.

The report concluded “the right to remain at home must be enshrined in legislation and supported by action”.