Maternity move back on track as hospital boards soften stance 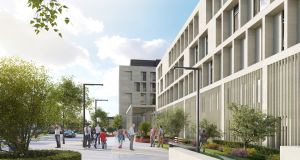 National Maternity Hospital: The Government believes the ownership structure of the new hospital will have to be changed in response to public concern.

The €300 million move of the National Maternity Hospital to a religious-owned site at St Vincent’s University Hospital is back on track after both institutions gave assurances about its autonomy.

St Vincent’s Healthcare Group last night dropped its threat of last week to review the project and gave its most explicit promise yet of the operational independence of the Dublin maternity hospital after it moves from Holles Street to the Elm Park campus.

“In line with current policy and procedures at SVHG, any medical procedure which is in accordance with the laws of the Republic of Ireland will be carried out at the new hospital,” its chairman, James Menton, said in a statement.

Mr Kearns, writing in today’s Irish Times, says a religious order will not control the hospital, which will be run by an independent board. “And whatever the law permits at any given time about carrying out particular procedures, these procedures will be available in this hospital.”

Dr Boylan, who claims the new hospital will be subject to Catholic interference through its ownership by the Sisters of Charity, has won support for his stance from the doctor charged by the HSE with planning the project.

Prof Chris Fitzpatrick, a former master of Coombe Women & Infants University Hospital, predicted the move will inevitably lead to conflicts of interest between doctors and the Catholic Church.

“It is wholly inappropriate in 21st-century pluralist, secular Ireland that the ownership of this publicly funded women’s and infants’ hospital should be entrusted in any shape, way or form to a religious organisation of any denomination.”

The project should go ahead at St Vincent’s but the hospital should be given possession of the site by the order, he says in a letter to the HSE seen by The Irish Times.

Dr Boylan is expected to resist the call for his resignation when the directors of the National Maternity Hospital meet this evening. Two political appointees on the board, Mícheál Mac Donncha of Sinn Féin and Brendan Carr of the Labour Party, will support his right to speak out.

Endorsement of the project

The hospital’s master, Dr Rhona Mahony, its clinical director, Prof Declan Keane, and 25 other consultants have signed a letter endorsing the relocation project. The arrangements agreed with St Vincent’s will give the National Maternity Hospital complete clinical autonomy and the Sisters of Charity will not be involved in its operation, they say.

“We believe this move must take place as urgently as possible for the sake of the women and infants in this country that we serve. The clinical arguments must not be derailed by sensationalist misrepresentation.”

Although not every consultant has so far signed the letter, Dr Boylan is understood to be the only person who has refused to sign it.

Speaking last night on RTÉ, Prof Keane said he had “no doubt” that the nuns would not interfere with the clinical working of the hospital and that it would be able to offer IVF, sterilisation, gender reassignment and, where legal, abortion.

The Government believes the ownership structure of the new hospital will have to be changed in response to public concern. Minister for Health Simon Harris is expected to brief his Cabinet colleagues today on a process he will seek to initiate in the coming days to defuse the crisis, which has threatened the long-awaited move of the maternity hospital.

Mr Harris will ask the boards of the two institutions to enter a month-long process in a bid to agree a new ownership structure, sources said.

The Minister said in a statement that he intends to report to the Government at the end of May.