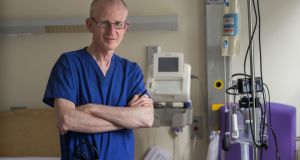 Dr Chris Fitzpatrick: “Consideration should be given to handing over the ownership of the site cost-free.” Photograph: Dara Mac Dónaill

The proposed transfer of the National Maternity Hospital to a religious-owned site at St Vincent’s Hospital is inappropriate and insensitive, according to the doctor charged by the HSE with planning the project.

Dr Chris Fitzpatrick, a former master of the Coombe, has thrown his weight behind fellow obstetrician Dr Peter Boylan by predicting the move would inevitably lead to conflicts of interest between doctors and the Catholic Church.

The project should go ahead at St Vincent’s but the hospital should be given possession of the site by its owners, the Sisters of Charity, he says in an internal HSE letter seen by The Irish Times.

Contacted about the letter, Dr Fitzpatrick confirmed he wrote it “out of deep concern for what is happening”.

“This is a defining moment in terms of the Irish maternity services – the first of four new colocated maternity hospitals to be built arising out of the new Government strategy – so it’s essential to get it right.”

“I would respectfully suggest given the current controversy that serious consideration be given to handing over the ownership of the site cost-free to the National Maternity Hospital in the interest of women and babies – and in the national interest.”

Dr Fitzpatrick is the representative of the HSE clinical programme in obstetrics and gynaecology on the project board planning the move. He made his comments at a meeting of the National Maternity Hospital/St Vincent’s University Hospital Co-location Project Board last Friday and repeated them in a letter to its chairman, Jim Curran, the same day.

In the letter, he acknowledges the generosity of St Vincent’s and the Sisters of Charity in making a site on their campus available for the hospital.

“It is, however, in my view, wholly inappropriate in 21st century pluralist, secular Ireland that the ownership of this publicly funded women’s and infants’ hospital should be entrusted in any shape, way or form to a religious organisation of any denomination.”

“Given the chequered history of the Irish Catholic Church in relation to female reproductive health, it would be deeply insensitive if this was to happen and it would also have the potential to erode public confidence in the clinical services provided.”

It was “wishful thinking” to believe the arrangement could never lead to a conflict of interest between the ethos of the owners and clinical practice, he said.