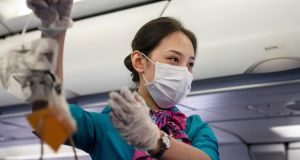 A flight attendant of Cambodian Lanmei Airlines demonstrates safety procedures in the airplane while wearing a face mask during a flight from Cambodia to Guangzhou, China. Photograph: Alex Plavevski/EPA

A passenger who arrived in Dublin Airport and was suspected of having the coronavirus has tested negative for the disease.

The passenger, who was placed in isolation after arriving in Dublin Airport on Saturday from Moscow, was tested yesterday by the National Virus Reference Laboratory (NVRL) in University College Dublin.

The NVRL has in recent days acquired the ability to test for the new coronavirus; previously, test samples had to be sent to the UK, where the turnaround time for results was up to 48 hours.

The Health Service Executive confirmed there are no confirmed cases of the virus in Ireland as of Monday morning, and that testing is now operational at the NVRL.

With the death of a 44-year-old Chinese individual in the Philippines at the weekend, the first fatality outside China the death toll from the virus has reached 305, with 14,564 cases now confirmed, health authorities said on Sunday.

The head of the World Health Organisation’s emergency team, Dr Mike Ryan said he has “every confidence” public health authorities in Ireland are making the right preparations for the virus.

“We handled Sars quite well and sensitively,” the Geneva-based Sligoman told The Irish Times. “A key thing is for doctors and emergency departments to be in a position to be alert for, and to detect, cases.”

With China’s stock markets preparing to re-open on Monday after an extended Lunar New Year holiday, there is growing nervousness about the impact of the crisis on the country’s economy.

The passenger in Ireland’s first-known suspected case was removed from Dublin Airport by ambulance after arriving from Russia.

Other passengers were told in leaflets they had been “on a flight with a possible case of novel coronavirus” and were advised to “avoid contact with other people as much as possible tonight”.

They were due to be contacted by a public health doctor on Sunday.

They were also told to stay at home or in their hotel room if they became ill, “especially with cough, sore throat, breathlessness or high temperature”, and to phone a doctor or 999, mentioning that they had been on the flight.

Under existing procedures, airline pilots are required to radio ahead to ground staff where a medical emergency arises involving a passenger, so that the person can receive immediate medical attention on landing.

“I’m conscious that we over-associate this disease with China. This is the country where it emerged, true, but it could have emerged anywhere.”

The swine flu epidemic started in Mexico, and Ebola in the Congo, he points out.

“China needs our solidarity right now, and recognition of what they’ve done to fight this. We need to work closely with them.”

“This is a time for facts, not fear. A time for solidarity, not stigma.”

He also pointed out: “There’s a much higher chance in Ireland of getting flu and, if you’re not vaccinated against flu, that translates into a bigger risk of getting sick and dying.”

While some countries are operating temperature tests on passengers arriving at airports, Ryan says the WHO does not support entry screening, and considers exit screening more effective.

“If it is used as part of a broader set of measures, that’s fine, but entry screening alone is certainly not enough. You can’t just put up a few thermal cameras. The real point of entry for cases is probably in the GP surgery or the emergency department, when someone shows up.”

Hand hygiene is more useful in preventing the spread of the virus than wearing face masks, he said.