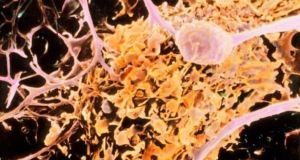 An important discovery that could lead to more effective treatments for people living with multiple sclerosis (MS) and other autoimmune diseases such as psoriasis and rheumatoid arthritis, has been made by scientists from Trinity College Dublin.

The researchers have identified the role played by a specific immune molecule, known as IL-17, in “priming” cells that cause the disease. Rather than being directly involved in damaging the nervous system, IL-17 kick-starts the disease-causing immune response that mediates the damage, they believe

Their work, published in Immunity scientific journal, also suggested there is significant potential in drugs that target the IL-17 molecule, both for MS and psoriasis/rheumatoid arthritis.

MS is a debilitating disease that affects some 2.3 million people globally and over 9,000 people in Ireland. It is associated with infiltration of immune cells into the brain and spinal cord that cause damage to nerves, leading to neurological disabilities.

However, the cause and precise immunological basis to this autoimmune disease is still unclear.

Studies in a mouse model of MS, called experimental autoimmune encephalomyelitis (EAE), have shown that immune ‘T cells’, which secrete IL-17, cause damage to the myelin sheath that surrounds nerves in the central nervous system (CNS).

Early clinical trials with antibody-based drugs that block IL-17 are showing promise in the treatment of relapsing-remitting MS and have already been licensed for the treatment of psoriasis.

The Irish research outlines a new role for IL-17 in EAE and, potentially, in MS. “The new research shows that, instead of playing a direct part in CNS pathology, a key role of IL-17 is to mobilise and activate an army of disease-causing immune cells in the lymph nodes that then migrate to the CNS to cause the nerve damage,” said Prof Kingston Mills, professor of experimental immunology at TCD.

“Crucially, our findings suggest that drugs that block IL-17 may not need to get across the blood-brain-barrier to be effective in treating MS,” add Dr Aoife McGinley, another member of the research team.

“So, as well as shedding new light on the importance of IL-17 as a drugs target in RR MS, our research highlights the huge potential of drugs that block IL-17 in the treatment of other autoimmune diseases.”