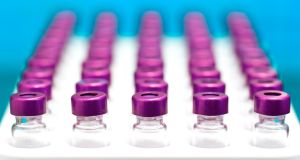 About 15 per cent of samples will test positive for HPV and these will be prioritised for examination under the microscope. Photograph: iStock

The main Irish laboratory used by CervicalCheck is to stop accepting new smears from GPs as part of arrangements to clear the 80,000 backlog in the programme.

MedLab Pathology will henceforth concentrate on processing its 60,000 share of the backlog, under the arrangements made with the Health Service Executive (HSE).

The new procedures were due to take effect on Wednesday but may be delayed slightly pending the finalisation by the HSE of arrangements to have new smears tested abroad.

The HSE has said it has sourced new capacity overseas to help deal with the backlog and officials have visited sites in the US in recent weeks.

The US labs are operated by Quest Diagnostics, which already provides testing services for CervicalCheck.

The new arrangements mean that all but a small proportion of new smears, which are tested by a third lab at the Coombe hospital, will be performed overseas.

MedLab, based in Sandyford but owned by the Sonic Healthcare group from Australia, mostly tested slides from women living in the south and west of the country.

Because of the backlog, patients are waiting up to 33 weeks to receive the results of their smears.

In an update to patients this week, CervicalCheck said it had agreed with MedLab that the lab would carry out a HPV test first on smear test samples that were reaching a storage limit of six months.

Some types of HPV (human papillomavirus) can cause changes in the cells of the cervix that can later develop into cervical cancer. About 15 per cent of samples will test positive for HPV and these will be prioritised for examination under the microscope.

If this cytology test finds changes, the woman will be referred for colposcopy, a detailed look at the cervix.

Where the HPV test is negative, the woman is considered as at a much lower risk of developing cervical cancer, and cytology will be carried out “at a later stage and not immediately”, according to the update.

“This means that if you have negative HPV results, you may experience a further delay in getting your final result. This is because the laboratory is prioritising HPV-positive tests for cytology. This is so that results and recommendations can be given more quickly to those women most at risk.”

While the HSE has just now provided this update to women on its website, when contacted, a spokesman for the executive said the arrangements in relation to HPV testing were put in place since the start of the year and applied to all slides in the backlog, not just to those approaching the six-month storage limit.

The backlog is largely the result of a Government decision last year, at the height of the CervicalCheck controversy, to offer women free out-of-cycle smears.