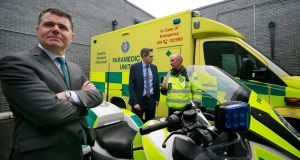 Minister for Health Simon Harris has sought the advice of Attorney General Seamus Woulfe on whether it is possible to make it mandatory for children to be vaccinated if they attend schools or crèches.

The request comes as a United Nations report warned that the number of measles cases in Ireland had increased more than three-fold and that millions of children worldwide are missing out on the measles vaccine.

The report says the number of Irish measles cases has risen by 244 per cent, from 25 in 2017 to 86 last year. So far this year in Ireland there have been 48 cases of measles, a highly contagious disease that can kill or cause blindness, deafness or brain damage.

In response to a rise in measles cases there, British health secretary Matt Hancock has said he could not “rule out” making vaccination a mandatory prerequisite to attending crèche or school. Mr Harris on Friday said he was also considering such a move.

“We obviously have a written constitution and we obviously need to take legal advice in relation to what we can and can’t do legislatively in this country,” Mr Harris said. “I haven’t made any firm decisions yet or consulted Government colleagues on the matter but I do feel very strongly about it.

“I feel there is something irresponsible and that is against the public good sending an unvaccinated child into a school, into a crèche or into a public place where they could actually make other children sick, particularly young babies who might be too young to actually get vaccinated, who could then end up with a very significant disease and also vulnerable groups in our community.”

However, the Minister said there were more ways to increase take up rates than just making vaccination mandatory.

“I also have my department doing an analysis on what other countries have done and it varies...But we need to do more than that. We need to form an alliance of healthcare professionals and policy makers to push back against the absolute nonsense that is put out by some, often on social media, in relation to vaccinations.”

Mr Harris said there is a lot of “scaremongering” and “populist nonsense” on the issue and added he will write to every TD and senator to ask them to commit to supporting the childhood immunisation programme.

Peter Power, the Unicef Ireland chief executive, warned that measles would “always find unvaccinated children” and that the foundations for the ongoing global measles outbreak were laid years ago.

“If we are serious about averting the spread of this dangerous but preventable disease, we need to vaccinate every child, in rich and poor countries alike.”

Dr Lucy Jessop, head of the HSE national immunisation office, warned that one case of measles could infect up to 18 people and that the only protection was the MMR vaccine.