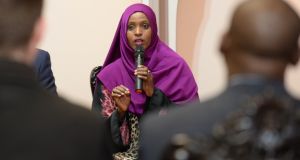 Ifrah Ahmed said FGM was not just a women’s issue, it was everyone’s issue. Photograph: Cyril Byrne / THE IRISH TIMES

Victims of female genital mutilation (FGM) living in Ireland are not availing of medical and counselling services offered to women and girls by the State, support groups have warned.

The Ifrah Foundation, a charity that supports women subjected to and at risk of FGM, says many women who have undergone the cutting practice are not making use of services at the Irish Family Planning Association (IFPA).

The association offers counselling and treatment to victims suffering physical problems such as constant pain, problems passing urine, problems having sex and problems giving birth. However, cultural barriers and fear of the unknown are preventing many women and girls from using the service.

“It’s very emotionally laden and people find it really difficult to even talk about it, not least access the services,” said Leonie Kerins, executive director of the Ifrah Foundation. “I know there’s a cultural resistance to engaging with counselling and talking through therapy, that’s another challenge. We know that people are way more likely to take on board this information if it comes from a peer.”

An estimated 5,790 women and girls in Ireland have undergone FGM, while an additional 2,700 women and girls in the State are believed to be at risk of cutting. FGM involves the partial or total removal of the female genitalia with the aim of inhibiting a woman’s sexual feelings.

Somali-born Irishwoman Ifrah Ahmed, founder of the eponymous foundation, has called on the Government to work in collaboration with foreign nationals to ensure communities are fully aware of the services available. She said many women from communities which still practised FGM lacked the confidence to approach an Irish nurse or doctor for help.

“I come from a community where talking about your private area is not something women want to do,” Ms Ahmed. “It’s very disturbing to explain all the details. This is not just a women’s issue, this is everyone’s issue. It’s about getting all nationalities involved and making it fashionable to raise awareness so women feel they can talk and share.”

Ms Ifrah was one of a number of voices to call for a fatwa against FGM in February 2018 after prominent Muslim academic Dr Ali Selim advocated female circumcision in certain instances.

Ms Ifrah acknowledged Minister for Health Simon Harris’s condemnation of the comments and contacted his office to arrange a meeting to discuss additional support for FGM victims in Ireland.

Documents released under Freedom of Information request show Ms Ifrah contacted the Minister on a number of occasions in 2018 requesting that they meet. However, she has not met him to date.

“I saw that he had spoken out about this and felt it was a great opportunity to meet him to discuss how important this issue is. He was always busy but I didn’t give up. I went back to Somalia for a while but I’ll be in Dublin from May so hopefully he can find the time to meet.”

The HSE’s second National Intercultural Health Strategy, launched in January 2019, calls for further training to be provided for frontline healthcare professionals to ensure FGM victims receive appropriate care and protection. It also underlines the need for wider awareness that the practice is a criminal offence under the Irish Criminal Justice (Female Genital Mutilation) Act 2012 and calls for the establishment of an “interdepartmental committee on FGM” tasked with the role of drawing up a national action plan to combat FGM.

Asked earlier this month by Fine Gael TD Marcella Corcoran Kennedy to comment on the progress of the committee, Minister of State for Health Catherine Byrne said discussions around further actions on FGM were “ongoing”.

Siobhán McGee, chief executive of Action Aid, argues that while legal measures outlawing the practice are important, the law doesn’t automatically change the culture. Having worked with women in direct provision centres, Ms McGee found that education programmes are needed by people going through the asylum process while greater awareness is also required among gardaí, doctors and school teachers.

“It’s about working with individuals on a community basis. In direct provision, when they start to have the tools and support they get the chance to say no and thinking really begins to shift. We’re conscious that not all people seeking asylum have undergone this practice, we don’t want to be ‘othering’ people in that situation. But it does change people’s understanding about their right to say no.”