Coronavirus – the science: How physical distancing works and saves lives 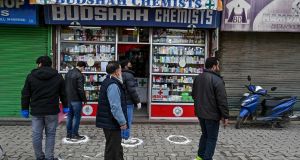 People stand on designated areas to maintain social distancing as they queue outside a medical store during a government-imposed nationwide lockdown as a preventive measure against coronavirus in Srinagar in India. Photograph: Tauseef Mustafa/AFP via Getty Images

War on Covid-19 is three-pronged: a longer-term race to produce a vaccine effective in large populations; generation of treatments (antivirals) for deployment in the meantime and use of coronavirus antibodies known as immunoglobulins. These are proteins produced by plasma cells in the bloodstream and used by the immune system to neutralise pathogens such as viruses.

Presence of antibodies confirms infection, so testing for their presence can be a valuable indication of immunity, especially for those working in healthcare.

In addition, antibodies have big potential as a treatment. Like the global race to produce a vaccine, numerous labs are working on developing quick antibody tests, some of which may even be self-testing kits.

Meanwhile New York health authorities plan to begin collecting plasma from people who have recovered and inject the antibody-rich fluid into patients still fighting the virus in clinical trials. Known as convalescent plasma, it has been used for centuries, and was deployed during the horrendous flu pandemic of 1918, but not in recent decades.

Some experts say the treatment, though somewhat primitive, might be the best hope for combating coronavirus until more sophisticated therapies are developed, which could take months.

Infusions of convalescent plasma were associated with milder symptoms and shorter hospital stays for some patients during the 2002 SARS outbreak, and initial reports from China suggest it might also be effective in dulling the effects of Covid-19.

The treatment is not without risks. There is danger in giving a patient the wrong type of blood or inadvertently transmitting other pathogens in a transfusion, but safety advances in recent decades have made adverse outcomes rare. Initially, it will be offered to critically ill patients. Once proven to be safe and effective, it’s likely to work best with patients before symptoms become too severe.

The US pharmaceutical Regeneron, which has a large “industrial operations and product supply facility” employing 1,000 people in Limerick, has also identified hundreds of antibodies that could treat or prevent coronavirus.

It confirmed its “plans to initiate large-scale manufacturing by mid-April with antibody cocktail therapy, with potential to enter human clinical studies by early summer”.

“We don’t disclose which products are made where,” a spokeswoman said – though it’s recruiting specialist staff for its Limerick plant. Longer term antibody tests will also help researchers understand how long immunity to the virus lasts; a key issue for any future vaccine.

The science of physical distancing

The point of the Covid-19 spear looms ever closer. That’s when it will cause its maximum toll – the top of that dreaded cases curve.

At this stage of the pandemic with cases jumping daily, physical distancing within the community assumes critical importance; hence the new, scaled-up restrictions with a tightening up on that key measure.

Obviously, it fits with the strategies of wash your hands; self-isolate if showing symptoms, cough/sneeze into elbow; and “test, test, test”.

– Between people who are in close contact with one another (within about 2 metres);

– Through respiratory droplets carried in the air produced when an infected person coughs or sneezes.

These droplets can land in the mouths or noses of people who are nearby or possibly be inhaled into the lungs.

Justifying the approach: Physical distancing is not a notional precaution, it’s a scientifically-justified action based on mathematics, understanding of social patterns and medical knowledge (epidemiology). It hinges around determining the r0 (pronounced ‘r-nought’) value of an infectious disease.

The r0 for Covid-19 is estimated at 2.5. So a typical person who is infected will spread it to 2.5 - between two and three people – during the period they’re infectious. Without controls, a single case would lead to 1,000 cases after four weeks.

The objective is to get that figure down to below one. At that point the disease stops spreading; the typical person who is infected isn’t passing on the virus to anyone else before they recover.

A complex factoring in to how long the virus remains infectious; cultural considerations (extent to which people have physical contact), transmission data and immunity/susceptiblity considerations are all part of the r0 computation.

Key actions with Covid-19: All told with this pandemic, ensuring it has less opportunity to spread to other people, by seeing less of them, and by reducing the chance during an interaction that the disease will pass to you – or from you to another person – are critical community actions. That’s what forces the r0 down in this instance. So it’s back to the five-step strategy including physical distancing.

The proof: This is where contact tracing comes into its own, i.e. determining who an infected person has been in contact with – when they were likely to be infectious – and ensuring all self isolate.

Already Irish actions (notably physical distancing) taken so far confirm personal contacts have been reduced from 20 to 5, and of late tend to be confined to households.

That said, given the current trajectory of cases and deaths, public health specialists say a further 75 per cent reduction is needed to ensure the curve is forced down. So it’s back to physical distancing in the knowledge it works and saves lives.

– Tell-tale signs: Researchers are confirming the distinct traits of SARS-CoV-2 (the medical term for the virus) and key differences with influenza. It’s very stable and does not mutate much, i.e. alter its genetic mix as it spreads. In contrast, flu is like a pack of cards (made up of genetic parts) that shuffle every year. So there is good chance of generating an effective Covid-19 vaccine, while the annual flu vaccine is the best bet of leading immunologists, virologists and epidemiologists.

– The scale of human decency: Communities are mobilising to help the most vulnerable within their localities. Action by industry and universities with to the aim of helping those at the healthcare frontline is equally impressive. DCU’s Nano Research Facility is switching operations to make sanitisers, and Trinity’s Biomedical Sciences Institute gathered all of its gloves, gowns and face masks and sent them to St James’s Hospital up the road. Such actions are replicated across the country and are saving lives.

– Chink of hope on Italian front: There are tiny signs infection rate in Italy is moderating, notwithstanding its continuing, appalling death toll. These may merely be data blips. It suggests, none the less, the overall rate of increase is slowing; as if the pandemic is losing momentum inside a country where it has nowhere to go. Ireland cannot ease its curtailment efforts as rising cases here show no indication yet we can avoid the same fate of Italy.