Some 38,990 follow-up texts were sent and 8,872 follow-up calls were made to check that visitors were following public health advice 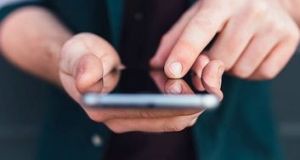 The Department of Health said follow-up text messages were sent to 71% of the 54,793 who completed the passenger-locator form ahead of travel into the country between December 21st and January 3rd. Photograph: Getty Images

Just 16 per cent of people who travelled into the State over the Christmas and New Year period received follow-up calls to check they were restricting their movements after their arrival.

New figures released by the Department of Health show the level of checks carried out on the passenger-locator form visitors are required to complete before travelling here.

The department said follow-up text messages were sent to 71 per cent of the 54,793 who completed the form ahead of travel into the country between December 21st and January 3rd.

The number arriving into the State over this time, 54,675 people, is lower than the number that filled out the form because it can be completed online in advance and some who filled it out may not have travelled in the end.

The information provided by visitors is used to contact them over the following 14 days to verify that the details are correct and, if the person has arrived from a “red” country with high Covid-19 infection levels, to ensure they are restricting movements for 14 days.

Some 38,990 follow-up text messages were sent and 8,872 follow-up calls made to check on visitors and ensure they were following public health advice.

The figures cover those who arrived into the State through Dublin, Shannon and Cork airports.

The period of restriction can be shortened if the visitor is in receipt of a negative or “not detected” test result from a PCR test – the standard test used to check for coronavirus – where the test is taken no earlier than the fifth day after arrival into the country.

Airlines and ferry companies will be able to refuse entry to passengers on Irish-bound planes and boats if they do not have a negative Covid-19 test under new regulations being drafted.

All travellers into the State will need negative PCR tests to enter the country from this weekend.

There will be no penal sanction imposed on airlines or ferry companies under the regulations.

Compliance with the requirement to present a negative Covid-19 test on travellers from Britain and South Africa, introduced last weekend, has been high, with 97 per cent of people producing a test result at the weekend, rising to 99 per cent over the course of this week.

Prosecutions will be considered in cases where people did not produce a negative test result.