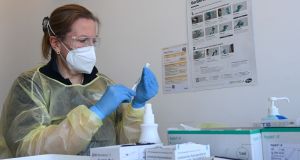 News that German pharmaceuticals company BioNTech, with US firm Pfizer, will almost double its Covid-19 vaccine deliveries to two billion doses this year has triggered calls for the vaccine to be obligatory for all medical and care home workers.

Just as Germany’s vaccination programme begins to gather momentum, anxiety over perceived dose shortages is shifting towards ethical questions and attitudes to the vaccine among those at the top of the queue.

A recent poll suggested half of German nurses and a quarter of doctors are wary of being vaccinated; a second survey in one federal state suggested only a third of health workers would accept the vaccine.

Such levels of scepticism, echoed in similar surveys from Austria to the US, prompted Bavarian minister president Markus Söder to demand a state intervention

On Tuesday, Mr Söder suggested a vaccination against the novel coronavirus should be obligatory for all hospital and residential home staff.

“It would good if the German ethics council made suggestions on for whom a vaccine obligation is conceivable,” he said. In senior care homes, he said, vaccinations were “at the end of the day, a matter of life and death”.

He also called on a broad public awareness and information campaign to frame the vaccination as a civic obligation – starting with public vaccinations of the heads of state and government.

That this hasn’t yet happened, he said, was because Germany was “rightly taking care first of the particularly vulnerable citizens”.

From next Monday the southern state of Bavaria – a Covid-19 hot spot throughout the pandemic – is to step up its restrictions, making so-called FFP2 masks obligatory for all in public transport and shops.

On Tuesday, chancellor Angela Merkel raised the possibility of extending Germany’s current lockdown, which is due to expire on January 31st.

“Things will stay hard until Easter,” said the German leader at a closed-door meeting, according to one attendee. “If we don’t manage to hold back this British virus, by Easter we will have an infection rate 10 times higher.”

Germany is currently registering more than 12,000 new infections daily, though a backlog of cases could mean revised higher numbers in the coming days, with both UK and South African variants now detected.

Official figures show nearly 700,000 Germans have been vaccinated against Covid-19.

So far Dr Merkel has been wary of positioning herself on rolling back restrictions, given some indications Covid-19 can be spread even by those who are vaccinated against the virus.

Germany’s 24-member ethical council is divided on privileges, or looser restrictions, for those who are vaccinated. In a vote before Christmas, 12 members were in favour of a so-called normal life passport, while 12 were opposed.

Meanwhile, the debate on the issue is growing across Europe, with Greece proposing a pan-EU travel certificate issued only to those who have had their jab.

Facing into a second year of travel restrictions, with knock-on effects for its tourism-dependent economy, Greece has made the suggestion ahead of a virtual EU Covid-19 summit on January 21st.

“The next months will be crucial for ensuring mass vaccination of EU citizens, while rolling back the infection rate and thus setting the basis for a return to a measure of economic and social normality during 2021,” wrote Greek prime minister Kyriakos Mitsotakis in a letter to European Commission president Ursula von der Leyen.

An important step to restoring normal free travel, he added, would be “to establish a standardised certificate that proves a person has been successfully vaccinated”.

A draft proposed certificate submitted would include personal details and the date of both vaccinations.