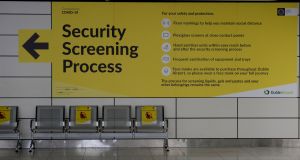 The European Centre for Disease Control (ECDC) has rebuffed criticisms by Irish public health officials of its stance on international air travel.

However, it is proposing to change the wording of its guidance after the Department of Health wrote to complain about “inconsistencies” and omissions in its messaging on travel.

Air passengers should not automatically be considered high-risk for spreading Covid-19 and should be treated like members of the local population who have not had any direct contact with an infected person, according to guidelines published by the ECDC and the EU Aviation Safety Agency last month.

The guidelines said travellers should “not be considered as a high-risk population, nor treated as contacts of Covid-19 cases, unless they have been in known contact with a confirmed positive case.”

A 14-day quarantine is effective only in the “exceptional situation” where a country has achieved full control over the virus and reduced transmission levels to close to zero, the document stated.

After chief medical officer Dr Tony Holohan publicly disagreed with the recommendations, the Department wrote to the ECDC relaying the “serious concerns” of public health officials.

Recent ECDC publications “contain inconsistencies in messaging that are not in accordance with evidence and member state experience,” according to the letter from deputy chief medical officer Dr Colette Bonner in December.

She claimed the guidelines ignored the significance of international travel as a “potential amplifer” of infection, especially in counties with low levels of transmission. At the time, Ireland had the lowest virus incidence in the EU.

She also asked where the ECDC got its conclusion that the prevalence of Covid-19 in travellers was estimated to be under 1 per cent. She said the significant of international travel as a potential amplifier was being underplayed, “particularly in relation to leisure travel over the coming festive season”.

The ECDC replied saying that “in the light of feedback” there were “elements of the phrasing” in the document that need to be modified.

It described as “unfortunate” the approach taken of separating out the risk assessment that travel should be discouraged from the guidelines on “proportionate measures” for mitigating the risks involved in travel.

“We had not anticipated that readers of the one document would not read, or would choose to ignore, the other document.”

However, the ECDC said it considers the scientific rationale for the conclusions in the document are sound “based on the evidence available”.

Dr Bonner is the Irish member of the management board of the ECDC.

Since the exchange of letters, international travel has been drastically curtailed due to the rise in infections, apparently driven by a more transmissible variant of Covid-19 first identified in the UK.