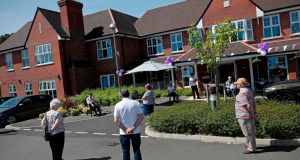 Friends and relatives stand in the car park observing social distancing as they talk to the residents at Gracewell residential care home in Adderbury near Banbury, west of London. Photograph: Adrian Dennis/AFP via Getty Images

New figures published on Friday show that the deaths of care home residents, whether in a home or in hospital, continue to account for more than half of all fatalities from coronavirus in Northern Ireland.

The Northern Ireland Statistics and Research Agency (Nisra) in its weekly bulletin reported on Friday that 36 people had died from Covid-19 in the week ending May 29th, bringing the total number of virus-related deaths in the North to 757.

The comparative total number of deaths reported by the North’s Department of Health up to that date was 528. The Nisra figure is close to one-third higher than the departmental figure.

The department statistics are based on patients having previously tested positive for the virus, whereas the Nisra figures are based on the information entered on death certificates completed by medical professionals.

The 336 deaths which occurred in care homes and hospices involved 78 separate establishments.

“On this basis deaths of care home residents account for 52.3 per cent of all Covid-19-related deaths. However, no assumptions can be made in relation to where or when the deceased contracted the disease,” said Nisra.

Nisra also reported that the provisional number of total deaths registered in Northern Ireland in the week ending May 29th was 316, 37 more than the five-year average of 279.

Over the last nine weeks in total, 939 “excess deaths” (deaths above the average for the corresponding period in previous years) were registered in Northern Ireland, with the number of “excess deaths” for the year to date to May 29th totalling 680.

People aged 75 and over accounted for two-thirds of all deaths and 80 per cent of Covid-19-related deaths registered this calendar year up to May 29th.

The Department of Health’s daily report for Friday showed that one more person has died from Covid-19 in the North, bringing the department’s total death toll up to 536.

The department also reported that just three more people tested positive for the virus, taking the number of confirmed cases in the North to 4,776. So far 57,007 people have been tested for the virus in Northern Ireland.

The PSNI indicated that no action is to be taken against the organisers of the Black Lives Matter demonstration held outside Belfast City Hall on Wednesday which was attended by an estimated crowd of up to 2,000 people. Many of those at the protest were accused of not observing social distancing rules.

Ms Foster said that people observing the Covid-19 regulations had cancelled large gatherings such as funerals and the Twelfth of July parades.

Urging those concerned to find alternative ways to protest, she told BBC Radio Ulster that “police need to be very clear with people that mass gatherings are against the law”.

The North’s chief medical officer, Dr Michael McBride, said the right to protest must be balanced against combatting the spread of Covid-19. He said there was “no cause that this virus respects”.

PSNI assistant chief constable Alan Todd also urged the organisers of the rallies to reconsider their plans. “These are not ordinary times; this is in the middle of a healthcare pandemic and therefore my sincere appeal to those people seeking to organise events this weekend is that they should not do so,” he said.

He said police were continuing to liaise with organisers of other parades.