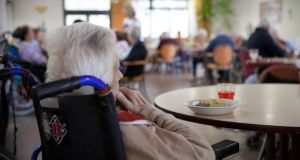 Some 280 complaints about nursing homes were made to the State’s health service watchdog during the first two months of the pandemic. File photograph: Getty Images

Nursing home staff who tested positive for coronavirus but had no symptoms were asked to continue working, according to a complaint made to the Health Information and Quality Authority.

And untested staff at another nursing home continued working though they had symptoms of the virus, a separate complaint says.

Some 280 complaints about nursing homes were made to the State’s health service watchdog during the first two months of the pandemic, newly released documents show.

Records released by the Health Information and Quality Authority (Hiqa) show that most complaints related to concerns about staffing issues and infection prevention and control within the care homes, and the lack of communication about the welfare of residents with relatives.

Of the complaints not redacted, the highest number, 48, related to concerns about lack of infection controls within the homes and about staffing levels and other staff issues.

There were 43 complaints about poor communication by the nursing homes, while there were 23 complaints about inadequate physical distancing in the facilities and 22 about the ban on visitor restrictions, most of which were made shortly after it was introduced in March.

The complaints peaked in the second half of April, coinciding with the surge in the number of outbreaks in care homes. Records show there were 17 complaints made to Hiqa on April 20th and 16 the following day. The number of complaints then fell before rising again to 21 on April 28th.

The first outbreak in a nursing home was identified on March 16th. By the end of March there were clusters of infection – defined as two cases or more – in 38 nursing homes. That figure reached 220 by the end of April. There were 257 nursing homes in the State with clusters last week.

Nursing homes have borne the brunt of the pandemic, accounting for 927 or 55 per cent of the 1,670 people to have died from the disease in the State.

No care homes were identified by Hiqa in the notes about the complaints.

The Irish Times requested details of complaints made by members of staff at nursing homes as well as from members of the public and relatives of the residents about the virus.

One “concerned person” – as the regulator calls a complainant – expressed concern about infection and control measures in place during an outbreak in a nursing home.

“Staff continue to work in this centre instead of self-isolating if showing symptoms,” says the note on the complaint dated April 8th.

On the same day, another person complained about a staff member at a nursing home who was also working at a local supermarket, which they felt may put residents at risk from the virus.

On April 21st, Hiqa received a complaint about a number of staff from one nursing home in local supermarkets wearing their uniforms after work and was “concerned about cross-infection”.

Another complainant raised concerns on March 20th about staff working shifts in both an acute general hospital and a nursing home during an outbreak.

On April 14th, Hiqa was told that a nursing home staff member had returned to work after self-isolating for two weeks but did not have a test and “continues to have a cough”.

On April 24th, a complaint came into the regulator about staff work practices affecting infection prevention and control where staff were working in both the kitchen and caring for residents.

In another home, concerns were raised on April 27th about a nursing home with an outbreak where “staff who had tested positive but have no symptoms have been requested to continue to work instead of self-isolating”.

A person complained on March 24th that a resident who had returned from Spain in the previous week returned to work without being quarantined.

Another person complained on May 6th about a shortage of personal protective equipment and requests for staff who have tested positive for the virus to return to work.

There were regular complaints about low staffing levels with one raising concerns about the number of staff out of work self-isolating. Two complaints refer to a lack of support from the HSE.

On April 9th one person complained that the manager of a nursing home was “not responding to emails or phone calls” and that they had “local knowledge that the centre has a Covid-19 outbreak but centre has not confirmed this with families”.

One person complained to Hiqa on May 1st that there was poor communication from management relating to confirmed cases of the disease in the nursing home and expressed concerns about whether “there are enough staff to look after the residents”.?

The failure to communicate with relatives was a consistent complaint over the two months but these increased in number as the outbreaks spread to more nursing homes.

One person complained on April 6th that there had been poor communication by the nursing home about their relative who had been confirmed positive with the virus.

“Phones are not answered and no updates are provided,” says the note on the complaint.

On April 17th an individual expressed concern that a nursing home did not tell their family who was admitting a relative into the home that it had a suspected case of the disease.

“Family would not have placed resident into centre if they had known,” says the note.

Another complainant raised concerns with Hiqa on April 20th that they had not been told whether the virus was in the nursing home and that they were concerned there were no visits of HSE-appointed doctors or nurses to advise and assist staff.

Early in the pandemic, on March 13th, one person complained about the delay in transferring a relative back to a nursing home as the home had requested the hospital carry out a test and and isolate the resident for 14 days prior to their return.

The hospital declined to test them because the “resident does not meet criteria”, the complaint note says.