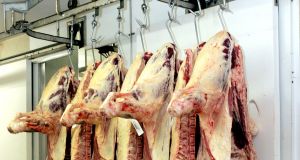 The number of new cases diagnosed in the Republic has risen rapidly in the last week, with many associated with outbreaks in several meat processing plants in the midlands. Photograph: David Sleator

The Oireachtas Covid committee is set to meet this week to discuss the rapid spread of coronavirus in meat plants in the midlands.

Members of the committee were emailed on Monday afternoon proposing a meeting this Thursday to discuss the situation in meat processing plants, and an examination of the State’s response to a recent spike in Covid-19 cases.

The number of new cases diagnosed in the Republic has risen rapidly in the last week, with many associated with outbreaks in several meat processing plants in the midlands.

Committee chairman Michael McNamara said that Minister for Health Stephen Donnelly and the acting Chief Medical Officer Dr Ronan Glynn would be asked to appear at the second session focusing on the Government’s response to the recent spike in cases.

The Health and Safety Authority, workers representatives and Meat Industry Ireland will be invited to the first session, Mr McNamara said, adding that the committee meeting was important to “get as much information as possible for the public”.

He said outbreaks in meat plants were not unique to Ireland, with clusters recently emerging in Germany. “Clusters in meat factories shouldn’t be coming as a surprise,” he said.

He also said it was important to establish why Government strategy was moving towards greater restrictions, which is “in marked contrast” to what other countries are doing.

Committee member and Social Democrats co-leader Roisin Shortall said the rise of the virus in the plants “looks like being the next nursing homes scandal”.

She said she wants meat plant owners and worker representive groups to come in and give evidence, as well as the Health Service Executive, to discuss its testing strategy for the sector.

“For many weeks there was huge additional testing capacity created and it wasn’t being used,” she said.

“There’s also questions for the Department of Agriculture vets and the Health and Safety Authority,” she added, saying that they were representatives of the State who had a presence in the meat processing factories.

Matt Carthy, the Sinn Féin TD for Cavan Monaghan, said it was a “welcome development” that the committee was to meet on the issue.

“There are big questions arising from our own meeting previously with the meat industry in July and developments since then,” he said.

Mr Carthy said there were issues for the Health and Safety Authority to address around its inspection regime of meat plants. “Why were they so long in commencing inspections of meat plants and why they felt obliged to inform meat plants when inspections were taking place?” he asked.

There is also a proposal for the committee to discuss the implications of a Zero-Covid island policy, which has been supported by a group of scientists and academics, who wrote to the committee last week. The group includes prominent public health, infectious disease and biochemistry experts.

The economist and commentator Dan O’Brien will also be invited to give evidence during this session, as will Prof Carl Heneghan, director of the Centre for Evidence-Based Medicine at the University of Oxford.