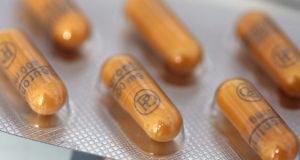 The €2.50 prescription levy has cost the State tens of millions of euro as patients move to other drug schemes to avoid it, a new analysis shows.

The much-criticised levy has raised an additional €40 million in additional annual income since it was increased from 50c per item to €2.50 in 2013.

Since then, however, the cost of the Long-Term Illness scheme, where no prescription charge applies, has soared, from €106 million, to €189 million in 2015. This is largely due to switching by patients to avoid the levy, according to the State’s top health economist.

Prof Michael Barry, head of the National Centre for Pharmacoeconomics, says the LTI scheme should be abolished due to rising costs and its inherent unfairness.

“It makes perfect sense to abolish it,” he said. “Politically, it would be a challenge but if we want to pay for innovative new medicines we have to look at all areas for savings.”

The levy was introduced for medical card-holders in 2010 and both the charge and the monthly maximum a patient has to pay were increased repeatedly in the years that followed.

In contrast to the medical card scheme, the LTI scheme is completely free and eligibility is not subject to means testing. However, it applies only to 16 specified conditions and successive ministers of health have resisted calls to extend the list by adding other diseases.

The cost of medications for diabetes – one of the prescribed long-term illnesses under the scheme – has fallen over this period under the medical card scheme while increasing under the LTI scheme, Prof Barry points out.

The Diabetes Ireland website even advises patients “how to avoid prescription charges” by switching to the LTI scheme.

The scheme, which was introduced in 1970, covers conditions such as diabetes, cerebral palsy, cystic fibrosis, multiple sclerosis, epilepsy, Parkinsonism and spina bifida.

Prof Barry says it is unfair that the scheme is not means-tested, and he claims some of the drugs prescribed are not directly related to the treatment of an illness, as supposedly required under the terms of the scheme.

The Government responded to criticism of the prescription levy in last year’s budget by reducing it to €2 per item for the over-70s.