Hundreds take to a Zoom rally in support of Debenhams workers 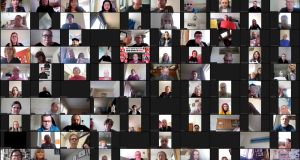 A small number of the hundreds of participants who joined an E Rally in support of the Debenhams protesters on Wednesday. Photograph: RollingNews.ie

Almost 500 people took part in what is claimed to have been Ireland’s first virtual protest, to call for “Justice for Debenhams workers”, on Wednesday.

Hosted by Mandate trade union and the online campaigning organisation Uplift, the “rally’’ took place on Zoom and followed a number of small protests outside the now closed-down Debenhams shops across the State.

Debenhams Retail Ireland (DRI), which employed 957 people in its 11 branches, went into liquidation earlier this month, having closed initially in response to the Covid-19 pandemic. Former employees say they had been told by senior management the stores would reopen, only to be told by email a week later the stores would remain closed.

About 30 people, mostly women, staged a socially-distant protest outside the main Dublin branch on Henry Street. A previous protest was prevented from continuing last week by gardaí who said it was “non-essential”. On Wednesday the workers were allowed to stand two metres apart for about 20 minutes as gardaí looked on.

Among their demands are that DRI “fully explore” alternatives to closing completely, that as many jobs as possible be saved and if they cannot be saved, that the company honour redundancy agreements reached with Mandate in recent years.

Maureen Carroll (52) from Goatstown, who worked for the company for 16 years, said, “I gave a thousand per cent to that company. I loved that job. I really loved it. I’ve never done a protest before. I couldn’t come last week because I was too broken…It’s an awful shock to all of us what they did, by a generic email. When I was reading it I thought I was reading it wrong. My brother passed away 10 years ago and it was like the same blow. It was like a death.”

Shop steward, Jane Crowe, said the workers did not believe the British company really tried to save the Irish operation.

“They told us things were fine and a week later they just went straight into liquidation. We all got a generic email to tell us, ‘Your job is gone’. So service, loyalty, nothing had anything to do with it. I am working with Debenhams 24 years.

“We want the Government to do something, to introduce something that will stop other companies doing this – going into liquidation and using Covid-19 as an excuse.”

Debenhams has been joined in recent weeks by other British retailers who have announced they will not reopen after the coronavirus crisis, including Warehouse, Oasis and Laura Ashley.

A number of placards criticised Bank of Ireland, which has a five per cent stake in the company, calling on it to support their demands.

A spokesman for bank the said: “As a long-term lender to Debenhams we were very disappointed that they had to suspend trading in Republic of Ireland stores…We are a minority lender to Debenhams and hold a small (about five per cent) shareholding as part of a 2019 new money debt restructuring to support the business.”

A spokeswoman for Debenhams Retail Ireland said: “In relation to the protests that have taken place today we note the business is currently in a consultation process with employees. DRI understands this is a very difficult time for its dedicated employees and greatly regrets having had to seek liquidation.”