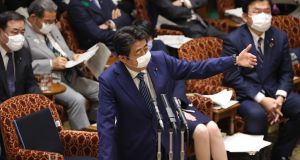 Japan’s prime minister, Shinzo Abe, has given the starkest warning yet that the rearranged Tokyo Olympics next year might have to be cancelled completely, saying it would be difficult to stage them if the coronavirus pandemic is not contained.

Speaking in the Japanese parliament, Abe stressed the importance of developing vaccines and drugs to combat Covid-19 before the Games begin on July 23rd next year. “The Olympic Games must be held in a way that shows the world has won its battle against the coronavirus pandemic,” he said. “Otherwise, it will be difficult to hold them.

Abe’s comments came a day after the Tokyo 2020 president, Yoshiro Mori, was asked whether the Games could be delayed until 2022 if the pandemic remains a threat next year. “No,” he replied. “In that case, it’s cancelled.”

Health experts – including Dr Anthony Fauci, a key member of the White House’s coronavirus task force – have said that development of a vaccine for the disease is at least a year to 18 months away.

This week the Japan Medical Association also expressed doubt over whether the Games could go ahead without a vaccine. However, one senior International Olympic Committee official said that was not necessarily the case. “I saw that opinion,” John Coates, the head of the IOC’s coordination commission, said. “But the advice we’re getting from the World Health Organisation says we should continue to plan for this date and that is what we’re doing, and that’s not contingent on a vaccine.

“A vaccine would be nice. But we will just continue to be guided, as we must be, by WHO and the Japanese health authorities because in all of this, the health and wellbeing of the athletes and other participants in the Games is the number-one priority.”

Meanwhile in an open letter to the Olympic movement the IOC president, Thomas Bach, said the organisation was reviewing its budget and priorities because of the pandemic and postponed Tokyo 2020 Games. Bach warned there needed to be a “comprehensive debate’” to shape sport in a post-coronavirus world and proposed a wide-ranging consultation on the future challenges and possibilities including looking “more closely into the proliferation of sports events”.

The IOC president also confirmed the postponement of the Tokyo Games would cost it hundreds of millions of dollars. “Although it is too early to give an exact figure, we already know that we have to shoulder several hundred million US dollars of postponement costs,” Bach wrote. “This is why we also need to look into and review all the services that we provide for these postponed Games.” He said everyone would have to make sacrifices and compromises.

Bach declared it too early to say what the future would look like, but it was clear “probably none of us will be able to sustain every single initiative or event that we were planning before this crisis hit”, adding: “At this moment, nobody knows what the realities of the post-coronavirus world will look like. For the Olympic movement as a whole, we may also have to look more closely into the proliferation of sports events, as we already discussed at previous Olympic summits.

“The financial pressure on all the stakeholders, including National Olympic committees, international federations and organising committees, may require more consolidation in this respect.” – Guardian