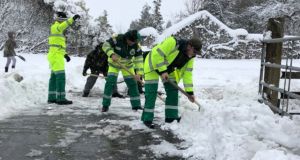 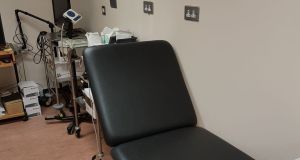 One of the trolleys at St James’s Hospital where a nurse had to sleep.

Nurses and other staff slept on makeshift beds in hospitals around the country in order to maintain services during the past 24 hours.

Staff who lived near their workplace put other members up for the night and arranged shift swaps so that those further away from work did not have to come in.

In some instances, there were complaints about the level of support provided to the staff who made creative arrangements to keep services going in their hospitals, but there was also widespread acknowledgement of the efforts that were made.

Siptu wrote to the Health Service Executive (HSE) to express concern that an ambulance station in Naas Co Kildare was left blocked with snow from 2.30 am to 11 am.

The situation was improved when a JCB that happened to be passing on its way to another location, stopped and cleared the snow. A video of the JCB giving a tow to an ambulance was posted on Twitter.

“Staff have also raised criticism of being repeatedly contacted by control to send them on calls when they had made it clear that vehicles are unable to leave the station,” Siptu said in a letter to the HSE.

“It should be noted that staff had turned up for work some walking long distances, others staying at local hotels to carry out their duties, they feel that they made the effort to provide a service but they felt that they did not receive the same support in return from management.”

Tallaght Hospital in Dublin was criticised in some media reports after a photograph was posted on Twitter of camp beds set out on the floor for staff who were remaining in the hospital overnight because they could not get home.

However hospital consultant Dr Jim Gray said the hospital had been very proactive in looking after staff with emergency accommodation including use of three hotels, 100 camp beds, dorm beds and mattresses in offices.

Radiographer Joyce Kearney commented on Twitter about how proud she was of Tallaght Hospital: “Everyone mucking in n sharing the load to take care of our patients!! And all with smiles on their faces! Great comradery and atmosphere about the place! Managed to walk an hour to a “safe house” and take refuge!”

The Irish Times was told that nurses in St James Hospital, Dublin, were asked to sleep on trolleys.

A spokeswoman said she would have to make enquiries about the claim that staff were asked to sleep on hospital trolleys.

Some hospitals put staff up in nearby hotels so that they could get a night’s sleep and return to work in the morning.

Paul Bell of Siptu’s health division said there were some very positive arrangements being made around the country as people worked to keep vital services available, but that there was a need for the Health Service Executive and the Department of Health to put in place better plans for such situations.

“The cancellation of outpatient appointments really worked. Some staff are sleeping in hospitals, others in hotels, some are sleeping in colleagues’ homes. Some staff were offered accommodation by members of the public. There’s some very good things going on. But there could be better organisation.”

The fact that the HSE and the Minister for Health Simon Harris were coming out with different messages about the treatment of staff who could or could not get to work, did not help, he said.

A particularly difficult issue has been with home helps and nurses getting to people in their homes but again there has been a lot of spontaneous assistance, with people with four wheel drive vehicles and other heavy vehicles, helping out, he said.