Senator urges more research into human health impact of microplastics, as researchers estimate more than half of world population may be affected 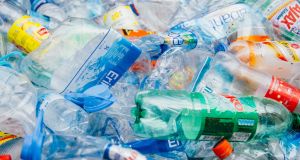 Senator Grace O’Sullivan (Green Party), who introduced a Bill in Seanad two years ago proposing a ban on microplastics in Ireland, said the study illustrated the scale of the plastics problem. Photograph: Getty Images

Microplastics have been found in human stools for the first time, suggesting the tiny particles may be widespread in food.

Responding to the findings, scientists in Ireland underlined the study did not show any detrimental health effect and the small sample size used.

The study by researchers in Austria examined eight participants (from the UK, Finland, Italy, the Netherlands, Poland, Austria, Japan and Russia). All of their stool samples were found to contain microplastic particles.

Up to nine different plastics were found, out of 10 varieties tested for. Polypropylene used in packaging, and polyethylene terephthalate (PET) used in plastic bottles, were most commonly found.

Diaries kept by each participant in the week before the stool tests showed they were all exposed to plastic by consuming plastic-wrapped food or drinking from plastic bottles. Microplastics are defined as particles of less than 5mm, with some created for use in products such as cosmetics but also by the breaking down of larger pieces of plastic, often in the sea.

The authors estimate “more than 50 per cent of the world population might have microplastics in their stools”, though they stressed the need for larger-scale studies.

Plastic in the gut could suppress the immune system and aid transmission of toxins and harmful bugs or viruses, according to gastroenterologists. Lead researcher Dr Philipp Schwabi from the Medical University of Vienna said: “Of particular concern is what this means to us, and especially patients with gastrointestinal diseases.”

While the highest plastic concentrations in animal studies have been found in the gut, the smallest microplastic particles are capable of entering the blood stream, lymphatic system and may even reach the liver. “Now that we have first evidence for microplastics inside humans, we need further research to understand what this means for human health,” he said.

NUI Galway head of zoology Prof Louise Allcock said it was a very preliminary study. “It is not entirely surprising to find microplastics in human faeces since evidence has been presented previously that they are in bottled water as well as various other sources.”

One thing that was clear; “that plastic is pollution and everything we can do to reduce plastic usage is a good thing”, Prof Allcock said. “In 2002, Ireland was the first country to tax plastic bags, leading to a 90 per cent drop in use. We need to keep at the forefront of the fight against plastic waste.”

Senator Grace O’Sullivan (Green Party), who introduced a Bill in Seanad two years ago proposing a ban on microplastics in Ireland, said the study illustrated the scale of the plastics problem. The human health issue needed further investigation, she believed, because of evidence plastics could act like “a sponge for toxins” by way of bioacculumation.

A separate Government Bill banning microplastics is due before Oireachtas in coming weeks.

It is estimated up to 5 per cent of plastics produced end up in the sea. Once in oceans, they are consumed by sea animals and move up the food chain. Significant amounts of plastic have been detected in tuna, lobster and shrimp. Food is also likely to be contaminated with plastic as a result of processing or packaging, say the researchers, whose findings were presented at a United European Gastroenterology conference in Vienna.

Prof Alistair Boxall of the University of York said the study highlighted humans were being exposed to microplastics in their day-to-day lives. “It’s therefore inevitable that at least some of these things will get into our lungs and digestive systems.”

More research needed to be done with “realistic exposures”, he added. “I don’t think we should jump to the conclusion this is down to true environmental exposure (ie from what gets into soil, river waters and marine waters).

“It could be that most of these materials may be coming from house dust and the use of plastic containers and packaging or, for example, nylon fibres from our tumble dryer – and this could potentially outweigh the environmental routes of exposure.”