After waiting 18 months for a decision on drug treatment by the HSE Lewis Harte now is waiting again after the HSE has asked the drug company to apply for a new application. Video: Enda O'Dowd 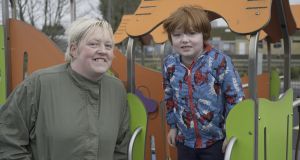 In August 2017 Ann Marie Walsh Harte learned that her then five-year-old son Lewis would not receive a new treatment for his Duchenne muscular dystrophy.

Lewis was diagnosed with the muscular disease when he was two years old. “It’s a terminal condition, you’re looking from teens to twenty five maybe, and that’s with or without medicine” Ms Walsh Harte explained. “What we do know is that the drug (Translaran) would keep Lewis walking for at least seven to 10  years.”

Ms Walsh Harte and her husband Pádraig, who live in Co Mayo, first heard the HSE would not make the drug available in January 2017. They appealed the decision and it was rejected again in August . “That decision was not acceptable to us, when we were told it was like a death in the family” said Ms Walsh Harte. “Being a no decision is something that I can’t accept because my son is slowly dying.”

After the refusal the drug company, PTC Therapeutics, began legal action against the HSE. It is believed to be the first time a company appealed a drug funding decision to the High Court.

Lewis’s family has continued to campaign on his behalf and Ms Walsh Harte met Minister for Health Simon Harris on November 10th of last year. Mr Harris subsequently met members of Muscular Dystrophy Ireland. On January 24th of this year the issue was raised in the Seanad by Sinn Féin Senator Rose Conway Walsh. She said: “The HSE has come back to the drug company and said we need to start the process again, we need to make a new application.

“This really concerns me because of the length of time that it would take for that process to go from start to finish.”

“I would plead with the Minister to do a conditional approval. We’re not taking about about hundreds or thousands or even dozens of children. We’re talking about five children.”

To compound the issue for Lewis, his physio in Castlebar took a leave of absence last August and he has been without physio since. “We’re doing the best we can by doing the physio we know and keeping him up and active, but things can be missed and physio is paramount for the condition.”

Ms Walsh Harte now hopes that the decision by the HSE on Translarna is made quickly. “These kids do not have time on their side for 18 months, not even six or three months” said Ms Harte “Having that ray of hope that there’s a medicine there has kept us going… knowing we can save him from this, that’s all I want, to save my son”.

In response, the HSE said: “Given there is a High Court case pending the HSE cannot comment further on the previous application. The HSE has informed the company in writing that it will consider any new application received in a timely fashion in line with the statutory requirements which it is legally required to consider.”

Covid-19: People in rural areas should be allowed travel further than 5km - Minister 18:24
Coronavirus: A further three deaths and 47 new cases reported in the State 18:11
Swann says cross-Border cooperation on tracing is ongoing 18:32
Two men charged with facilitating alleged attempted murder of Christy Keane 17:30
Government Minister expresses horror at death of George Floyd in the US 17:28