The ‘Bloody Foreigners’ campaign organised by The Immigrant Council of Ireland, Irish Blood Transfusion Service and Forum Polonia has been encouraging members of the Polish community in Ireland to donate blood. Video: Bryan O’Brien 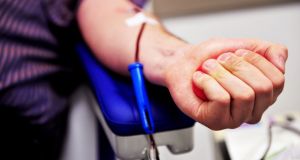 Siptu organiser Barnaba Dorda says Poland has a strong culture of donating blood but that many Poles forget to register with the Irish service when they move here.

Hundreds of members of Ireland’s Polish community will gather at blood banks across the country on Tuesday to celebrate a campaign calling on Irish-Poles to donate blood.

The Bloody Foreigners campaign, which kicked off in April, has seen hundreds of people become new donors with others, who donated blood in Poland before moving to Ireland, returning to their regular donations.

Teresa Buczkowska from the Immigrant Council of Ireland came up with the idea for the campaign after learning of the UK-wide blood donation movement aimed at promoting a positive image of migrant and ethnic minority groups. The UK campaign was formed in the aftermath of the Brexit referendum when hate crime towards eastern Europeans, and immigrants of other nationalities, rose sharply, says Ms Buczkowska.

“It’s about reclaiming the term ‘bloody foreigners’ and creating a positive connotation between blood and foreigners. It’s also challenging the notion that there’s such a thing as ‘purity of blood’.

“At the end of the day all our blood is red. It doesn’t matter if it’s Polish, Irish, Nigerian or Romanian. If you’re sick in hospital does it really matter where the blood comes from as long as it’s healthy? We might have different skin colours but we’re all connected through our biology.”

Ms Buczkowska says the initial response to the campaign was slow but that in recent weeks numerous groups around the country have pledged blood through the movement. While the campaign is currently targeting Irish-Poles, the blood drive is open to anyone.

Siptu organiser Barnaba Dorda says Poland has a strong culture of donating blood but that many Poles forget to register with the Irish service when they move here.

“I came to Ireland 10 years ago and had thought about giving blood but kept finding excuses not to sign up. It also struck me that many of my close friends had stopped donating blood when they moved here. Sometimes it takes another person to approach and persuade you.”

Tuesday’s day of action follows a call from the Irish Blood Transfusion Service (IBTS) for more people to donate blood during the summer months. Stephen Cousins from the IBTS says donations always drop during the summer period as people go on holidays and fall out of their regular routine. The low levels of haemoglobin in people’s blood during the summer also means some regular donors are deferred. The transfusion service needs 15,000 donors a month to maintain a seven-day supply at all times and is always looking donors of O negative blood which is often used in medical emergencies.

“We need more blood donors for starters because the average donor is about 41 years of age and we want younger donors. It’s not about giving blood once, it’s about coming back. And if you can break into a new community the long-term benefits are phenomenal. That means more blood and lot of lives saved.”

In Ireland people can donate blood every 90 days. Those donating for the first time who were born outside Ireland or the UK will be asked to give a “sample only” donation for testing. Once the analysis is complete they will be invited to complete a blood eligibility quiz before giving a full donation. For more information visit: giveblood.ie/Community-Support/Campaigns/Bloody-Foreigners/