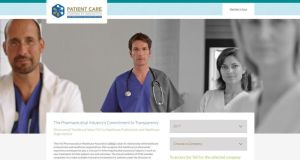 The homepage of the transferofvalue.ie web site.

The company says it appears errors were made when uploading the data to the website transferofvalue.ie, which is maintained by the Irish Pharmaceutical Healthcare Association (IPHA) as part of its transparency measures.

The effect of the errors in some cases was to magnify the payments made to doctors 100-fold, after the decimal point was incorrectly placed for some figures.

The Transfer of Value website was taken offline temporarily between April 12th and 13th to investigate a potential compromise. We are satisfied the site has been functioning properly and securely, and it is now online.

The website, which details so-called “transfers of value” – usually payments for research, travel and other transfers from large pharmaceutical companies to doctors – was taken down for a time over the weekend after the errors were highlighted on social media.

IPHA said it put the website back online after investigating a “potential compromise” of data and satisfying itself it was functioning properly. Data on the site is uploaded directly by the companies making the payments.

While the website is operating normally, it does not currently include data on payments made by MSD in 2016 and 2017.

In a statement, MSD confirmed the figures it had uploaded on the website were incorrect. “We are currently in the process of fully assessing the matter. Early indications have pointed to a systems issue in the uploading of the data, and we apologise for this.

“MSD is committed to accurately reporting this data and keeping all stakeholders informed as our assessment continues.”