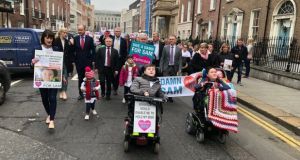 Opposition politicians joined families of children with spinal muscular atrophy who are seeking access to a new drug, Spinraza, in a march to Leinster House in February. Photograph: Paul Cullen

The Health Service Executive is looking again at sanctioning the only treatment on the market for the rare muscle-wasting disease spinal muscular atrophy (SMA), after the manufacturer dropped its price.

The HSE drugs group will make a decision within the next 30 days on the revised price application for Spinraza recently submitted by the manufacturer, Biogen.

The HSE leadership team in March decided against reimbursing Spinraza on grounds of price. It said the drug would cost about €600,000 in the first year to treat each of the 25 Irish children with the disease and €380,000 a year thereafter “with an estimated budget impact in excess of €20 million over a five-year period”.

Biogen then publicly called on the HSE to reconsider its decision, saying it had provided a “significant pricing proposal” that was in line with the final price negotiated in other European countries that have approved the drug.

However, it has since submitted a new offer following talks with the HSE, whose drugs group will now decide whether or not to recommend to senior management that they reimburse the drug. Under the negotiation process, the drugs group can also seek further information from the manufacturer on its pricing proposal.

A spokesman for Biogen confirmed the renewed offer but said he was unable to comment on price or any details of the company’s submission as the process was ongoing.

Spinraza is approved in 25 countries around Europe with just Estonia and the UK rejecting it, though it is available in Scotland.

As part of its submission, Biogen has previously provided the HSE with pricing for its portfolio of biosimilars – like-for-like therapies for expensive biologic drugs that have come off patent – that it says would offset the cost of Spinraza.

Families of children with SMA protested outside Leinster House in February, with members of most Opposition parties prominent among the attendance.