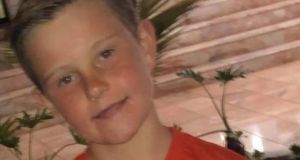 Last weekend, 11-year-old Bobby Lee was playing PlayStation like every other boy his age when he complained of headaches and a slight temperature. Later on, he developed diarrhoea and was so fatigued he could not get out of bed.

Within days, he was in Temple Street, “fighting for his life”, due to paediatric inflammatory multisystem syndrome (PIMS), a Covid-related illness found in children.

Danielle Ryan, Bobby Lee’s mother, said she and her partner tested positive for Covid-19 over the Christmas period. Bobby Lee wasn’t sick when the family had the virus, and “everything seemed fine”, until he felt unwell last week. They brought him to hospital when he failed to improve at home.

“They were doing tests and trying to find out what was going on. He was vomiting, diarrhoea, headaches, his blood pressure started dropping, his heart rate started rising and his oxygen levels started dropping. They came back in and said they think it could be PIMS,” she said.

His condition deteriorated further, to the point that the hospital feared he would need to be transferred to ICU.

“The doctors said they had ICU on standby for Bobby Lee because his blood pressure and his heart rate weren’t responding to what they were doing. They were really worried,” she said.

“They thought they would have to put him in an induced coma because his body wasn’t coping. They didn’t know what was happening, they kept trying to stabilise him.”

Thankfully, Bobby Lee stabilised without intensive care admission, but he is still on oxygen and “his mobility is non-existent”. Ms Ryan is hopeful that he is on the path to recovery, but there are still a lot of unknowns about the condition.

“This is still new. I keep asking for reassurance like any mother would, I’m constantly asking if Bobby is better now? But they keep saying they can’t tell me yet.”

Ms Ryan said she doesn’t want “any mother to go through what I’m going through”.

“I get really upset when people want everything back normal, and I’m sitting beside my son’s hospital bed. My son wasn’t in the high-risk category and look where I am now,” she said.

“I wouldn’t like to see any child lose their life to this. I would like to say I’m really thankful for the staff in Temple Street. They’re beyond what I expected. They’re amazing for what they’re doing for my child. I could never thank them enough for it.”

Children’s Health Ireland (CHI) describes the condition as “a hyper-inflammatory syndrome that has been described in children occurring in the aftermath of either exposure to/infection with Covid-19”.

In a statement, CHI said the severity of PIMS can vary and some children require “very little support”.

However, others have more severe disease, with inflammation of the heart muscles and the coronary arteries that supply blood to the heart.

“These patients require more intensive support including medications to suppress the inflammation, control temperature and support the patient’s heart and blood pressure,” the statement said.

“Children typically present with a persistent fever, rash, red eyes (conjunctivitis), and often with abdominal symptoms, in particular crampy abdominal pain and diarrhoea. Some of these cases resemble a previously described medical condition known as Kawasaki disease which shares many of the same features.”

Since the start of the pandemic there have been 32 children known to CHI who fit this description.

“All of these children have recovered and a small number remain as in-patients receiving treatment and have plans for discharge soon,” CHI added.

“The likelihood of increase in PIMS-TS is following the most recent surge in Covid activity [in] the community.”

According to the HSE’s website, a “very small number” of children who have Covid-19 have needed hospital treatment for the inflammatory syndrome, which they describe as “very rare” and “life-threatening”.