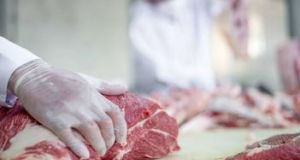 About 20% of meat plant workers in the Republic have contracted Covid-19, with three outbreaks in recent weeks. Photograph: Getty Images

The detection of the Brazilian variant of Covid-19 is a “real concern” for meat plant workers, who fear it could be more widespread than official figures show, a representative union has said.

On Friday the National Public Health Emergency Team (Nphet) announced that three cases of the Brazilian variant, also known as P1, were identified in the Republic.

A UK variant of the virus, known as B117, currently makes up 90 per cent of all new Covid cases in the Republic. A South African variant is also in circulation.

The new variants are believed to be more transmissible, and concerns have been raised that the vaccinations currently being used may not be as effective against these variants, though research on this matter is ongoing.

Greg Ennis, Siptu’s manufacturing division organiser, said between 60 per cent and 70 per cent of meat plant workers were migrants, with a “significant number” of those being from Brazil and South Africa.

“We know that workers tend to save up their leave during the year and travel home to Brazil, for example, at Christmas. It’s quite common, and that happened this year,” Mr Ennis said.

“I called for the quarantine situation back in November and December, for quarantine to be really heavily enforced and policed because of the numbers of migrant workers who work in the meat industry and who travel forward and back to their families.”

About 20 per cent of meat plant workers have contracted Covid-19 since the onset of the pandemic, with three outbreaks in recent weeks, according to the trade union.

The three cases of the Brazilian variant that were detected last week were all directly associated with recent travel from Brazil. A spokeswoman for the Department of Health said those individuals who tested positive “went into self-isolation as appropriate” upon their arrival into the country.

Public health officials have said there is no evidence of wider transmission of the variant.

A spokesman for Meat Industry Ireland (MII), an umbrella group representing meat processors, said its members are “extremely vigilant” of the risk posed by Covid-19.

“Robust protocols and mitigation measures remain in force. Ongoing regular PCR testing of employees across the meat processing sector continue to take place. To date, over 116,000 tests have been conducted with a very low positivity rate of 0.8 per cent,” the spokesman said.

Mr Ennis said that unless statutory occupational sick pay was introduced sooner rather than later, outbreaks in meat plants would continue and variants could spread.

“The workers who are earning €500 a week or less, if they have symptoms of Covid or they’re confirmed with Covid then they’re on a €350 per week payment. That’s €150 less than they would get compared to if they were working, which is a huge amount of money. It’s almost a third of their income [that] would disappear.

“We would know anecdotally of workers who have symptoms who go to work because they can’t afford not to. It’s the difference between putting food on the table or not.”

The Government has committed to enacting statutory sick pay legislation in the Republic by the end of this year.