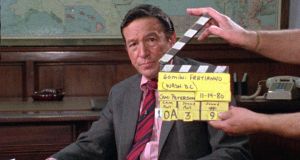 Former star correspondent for 60 Minutes Mike Wallace. His bad behaviour behind the scenes has been revealed in a new book. Photograph: Courtesy of Mongrel Media

When I went to live in the US in the 1990s, Mike Wallace was still one of the biggest names in TV journalism.

The ornery 60 Minutes star was close to 80 at the time, but regularly came up with knockout interviews that shot into the headlines.

Little did we viewers know what a monster he was to work with. In the newsroom he would poach stories from outraged colleagues, throw stuff at cowering producers and grab the bottom of any hapless female passing by.

All this was revealed last week by Ira Rosen, the late Wallace’s producer, in a new book called Ticking Clock: Behind the Scenes at 60 Minutes. And what scenes they were.

Wallace was also fond of snapping secretaries’ bra straps and getting women to sit on his lap. Once, after grabbing and squeezing the breast of a female producer, he said to her: “That time of month.”

Rosen himself was routinely shouted at and humiliated.

“The verbal harassment I experienced from Mike Wallace and other TV big shots was, in a word, criminal,” he writes. “Today I might call HR, hire an attorney, and threaten a very public law suit.”

But neither he nor anyone else did that, and so the abuse went on.

The book is a reminder of how much has changed since the years when such bullying was routinely ignored. For a long time there was not even a name for it. Newspapers did not use the term “toxic work environment” to describe dire workplace behaviour until 1993, the Factiva news database shows.

In 2019 it was used nearly 760 times. But last year there were a record 1,750 mentions, which I found quite surprising considering how many offices Covid-19 has emptied.

Early in the pandemic close to 60 per cent of Londoners were working at least part of the time at home. In the US, 42 per cent of the labour force was working at home full time.

I had thought that one of the few benefits of Covid-19 was that people at home might at least be spared the physical presence of someone like Wallace. They may be, but the experience of British business psychologist Clive Lewis suggests a toxic workplace does not go away when it goes virtual.

Lewis has also written a book that came out last week, Toxic, which is drawn from his experience running a workplace conflict resolution company he founded 16 years ago, the Globis Mediation Group.

“We are busier than we’ve ever been right now,” he told me the other day.

One common complaint comes from people who belatedly discover they have not been invited to big online work meetings. “That’s a big one,” says Lewis, whose clients range from the NHS to big corporations.

Online meetings themselves can deepen existing strains. People who refuse to put their video camera on in a meeting infuriate others, who say no one would hide their face in a normal office meeting.

Other cases are far worse. When we spoke Lewis had just been asked to intervene in a case at what he described as a very large organisation, where a man had told a female colleague the only reason she had been hired “was because of the size of her breasts”.

Lewis’s book makes two important points about such toxic behaviour: it is not just inhumane, it is costly, and though it should prompt speedy intervention, it often does not. It typically takes more than 19 months before a conflict goes to mediation, according to research Lewis carried out in the NHS. I doubt it differs much in other organisations.

In that time people subjected to toxic monsters can suffer depression, migraines, fatigue and a slew of other disorders that affect their work.

Rosen says his back went into painful spasms the entire time he worked for Wallace. Other producers on the show developed ulcers and worse.

As Lewis writes, studies estimate bullying and abuse cost billions a year in lost productivity. That is just the financial cost. The human cost is far harder to calculate, and indefensible at all times, whether it is incurred in an office or at a kitchen table.