Covid-19 tests for prisoners and officers at Midlands Prison 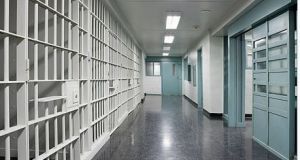 The Prison Officers Association has written to Minister for Health Stephen Donnelly to warn him that the prison service could “collapse” if the virus, which has to date been contained in the prison system after each outbreak, were to spread. Photograph: Getty Images

More than 1,000 prisoners and prison officers at the Republic’s largest prison are due to be tested for Covid-19 this week in a bid to control an outbreak of the disease.

The testing at the Midlands Prison, Portlaoise, Co Laois, will be carried out on staff between Monday and Wednesday, and prisoners on Thursday and Friday. While the outbreak was very small, sources said it was in a section of the jail housing sex offenders, some of whom are elderly.

The Prison Officers Association (POA) has written to Minister for Health Stephen Donnelly to warn him that the prison service could “collapse” if the virus, which has to date been contained in the prison system after each outbreak, was to spread.

The association said there had already been outbreaks of the virus in Cloverhill, Arbour Hill, Loughan House, Mountjoy, Wheatfield, the Midlands, and Portlaoise prisons.

It believes prison staff and prisoners should be prioritised for vaccination, adding that many prisoners had complex health needs and suffered from poor general health, with many also aged and having underlying health conditions.

The POA has told Mr Donnelly that in the institutional setting of a prison it was almost impossible to implement the precautions known to stop or slow the virus spreading.

The association’s assistant general secretary, Gabriel Keaveny, said that while many groups were lobbying to be moved up the vaccine list, prison officers and prisoners were working and living in close quarters where social distancing was not an option.

“We should be on a priority list. We have had a lot of outbreaks and at the moment we are dealing with the Midlands,” he said, adding there were now regular outbreaks across the prison system, forcing jails to be locked down.

A spokesman for Mr Donnelly said: “Given that there will be initially limited vaccines available, it will take some time for all to receive those vaccines, and that has necessitated an allocation strategy to ensure that those most at risk of death and serious illness receive the vaccine first.”

The Irish Prison Service, which has been praised for minimising the virus, said the Department of Health was making the overall determinations on the vaccine policy and the schedule for delivery of the vaccine.

“The Prison Service has commenced planning for the delivery of vaccine across the prison estate,” it added.

Mr Keaveny said there was now so much technology in Irish jails it would be impossible for Garda members or Defence Forces personnel to fill in for prison officers in the event of a more serious outbreak.

“We’ve told the Minister for Health Stephen Donnelly that we just don’t have access to any other staff, and that we have a relatively small number of staff. So if things were to go wrong, we have absolutely nobody else to run these prisons.

“There are fears around this new variant particularly. We can test all of the Midlands prisoners, for example, in a day if we had to. Vaccinating people could happen quickly.”