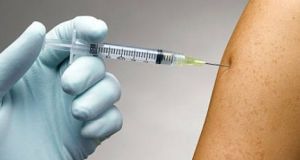 The HPV vaccine has been administered to teenage girls since 2010.

The State’s health watchdog is to assess the feasibility of extending the HPV cancer vaccine to boys.

The vaccine has been administered to teenage girls since 2010 but Ireland is now looking to follow the lead of other countries in extending coverage to boys.

HPV is also associated with the development of penile cancer in men, as well as causing genital warts in both men and women.

The Health Information and Quality Authority (Hiqa) plans to research the clinical justification and cost-effectiveness of providing HPV vaccination to boys, on foot of a request from Minister for Health Simon Harris.

“In most cases, it causes no symptoms and is cleared by the body’s immune system. However, persistent infection can lead to the development of cancer.”

When introduced for girls in the first year of secondary school by former minister for health Mary Harney, it was intended to roll out the vaccine to boys as well, but this has yet to happen.

Australia introduced the vaccine for boys and girls in 2006, since when a 90 per cent reduction in cases of genital warts in men and women has been reported.

Since it was introduced in Ireland, vaccination rates for girls have fallen from a peak of 87 per cent to 50 per cent due to opposition from parents who say their daughters suffered adverse effects after receiving it. No scientific evidence to support these claims has been reported.

“Dr Ryan said the vaccine has been proven to be safe and is highly effective at preventing infection with the HPV types most commonly linked with cancer and genital warts in both men and women.

Covid-19 and nursing homes: ‘Will we ever be able to hug our families again?’