Scientist says food not to blame for cancers 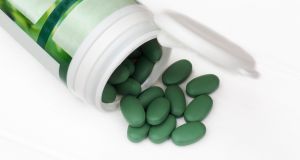 Green tea tablets. Prof Mike Gibney says claims that specific diets can cure cancer are “quack” remedies that have no foundation and lack any serious body of supporting scientific data

Most cancers are caused by bad luck and genetic factors, with little evidence to link specific foods to the disease, according to one of the State’s leading food scientists.

Prof Mike Gibney, professor of food and health in UCD, said vested interests, “a lunatic fringe” in the US and “a few loopers in Ireland”, are “peddling” myths about the impact of particular foods on cancers.

In particular, claims that specific diets can cure cancer are “quack” remedies that have no foundation and lack any serious body of supporting scientific data, he warned.

Prof Gibney, who is also chairman of the Food Safety Authority of Ireland, was delivering a lecture at the Irish Cancer Society on “Diet and Cancer: Separating Facts from Fiction”.

He cited the example of the alkaline diet promoted in the US by Robert O Young, who is facing a jail term for practising medicine without a licence. The therapy involves the use of intravenous infusions of baking soda to treat end-stage cancer.

Prof Gibney said there was no evidence associating the cause or prevention of cancer to organic food, pesticides, GM foods, additives or processing methods.

“Yet the so-called superfood, detox diet and organic lobbies are all peddling particular views that people suffering from cancer can be very receptive to.”

“People tend to have an irrational fear of cancer. At one stage, it was a death sentence, but not anymore for many patients. Yet the stigma remains, and with it the feeling they must have done something wrong to get the disease.”

He criticised extreme low-carbohydrate diets that claimed to slow the progress of cancer by reducing sugar intake. Cancer has a high energy requirement, but “it is the tumour that drives the need for sugar, not the sugar driving the tumour”.

Random mutations and genes account for three-quarters of all cancers. The rest are due to environmental factors, principally sunshine, smoking and lifestyle issues (diet/alcohol/physical activity).

Prof Gibney said the best advice on diet and cancer was to have a healthy weight, be physically active, eat plenty of fruit and vegetables, and wholegrain foods. High salt meats, and alcohol, should be limited, and high-fat diets avoided.