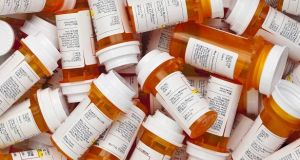 Pharmacists have warned people not to risk buying prescription medicines online or from unauthorised sources.

“You don’t know what you are taking or what effect it might have on you,” he said.

Mr Connolly said there was no quality control on medications bought online and there was a strong chance they may be counterfeit. “If they are counterfeit they are not manufactured to the appropriate standards, and they may not contain appropriate levels of the active ingredients, and, indeed, many contain ingredients that pose serious risk to your health.”

Mr Connolly said before pharmacists handed over any medicine to a patient they carried out a number of safety checks, as well as ensuring that the medication was suitable for the patient and that there were no possible drug interactions that may pose a problem.

“Furthermore, pharmacists only buy medicines from authorised legal suppliers, which means patients can be sure about the safety and effectiveness of medicines they buy directly from their pharmacy.”

The IPU warned that the supply of prescription medicines via the internet was illegal in Ireland, with suppliers often posing as “respectable and authorised pharmacies even though, in many cases, they are involved in criminal activity”.

Earlier this year the Health Products Regulatory Authority revealed its enforcement section detained 673,906 dosage units of falsified and other illegal medicines in 2016, compared to 1.1 million units in 2015. The illegal products included sedatives (40 per cent), anabolic steroids (16 per cent) and erectile dysfunction medicines (14 per cent).

It said those behind the websites supplying the products were “engaged in illegal activity”, and there were no guarantees about the safety or quality of prescription medicines sourced online.

Last year marked a significant increase in the number of anabolic steroids seized – some 109,006 doses compared to 38,049 the previous year.

Warnings about buying prescription drugs online appear to have had some impact, however, as there was a 62 per cent reduction in the number of sedative products detained last year compared to 2015.