Dentist’s perspective on cutbacks: ‘It is quite distressing’ 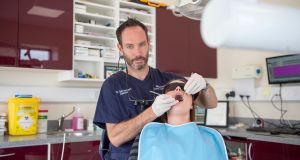 It’s terrible to see teeth that could have been saved having to be extracted, Dr Tom Rodgers says.

He is referring to some of his patients who have medical cards and cannot afford to pay for treatment themselves.

Under the State-funded scheme, since 2010, patients are entitled to two fillings a year only. If a third tooth needs to be filled, they must wait or have the tooth extracted. And pay-related social insurance (PRSI) patients are now only entitled to a free check-up, so they must pay for everything they need.

Dr Rodgers set up his practice in Blackrock village, Co Louth, in 2007, with a mix of medical card, PRSI and private patients. He had barely time to get going when the recession hit.

People had less money, the PRSI scheme was “slashed” and the medical card scheme was cut back. He has had medical card patients who already had their two-filling quota, and who had broken an old filling.

“I would tell them there was no way we could do it under the medical card because they had the two fillings done,” Dr Rodgers said.

The patients could find the money for the treatment, wait until the next calendar year, or have the tooth out.

“That can be done on the medical card – there is no limit on extractions,” Dr Rodgers says.

He has sometimes put a temporary dressing in a patient’s tooth while they waited to qualify.

“Sometimes you have to do it for free. If it’s a front tooth, I’m not going to take out a front tooth, so I put a dressing on it and hope for the best,” he says.

“But that doesn’t guarantee they are going to be pain free. And I’ve had lots of patients in that then have an abscess on that tooth as a result.”

An abscess means a root canal treatment is needed, to remove the dead nerve. Medical card patients can only have this done for free on front teeth, so back ones may be extracted if the patient cannot pay. And PRSI patients must foot the bill, or opt for extraction, which is considerably cheaper.

“It’s terrible, because you are seeing something that can be saved and the patient can’t afford to pay,” says Dr Rodgers.

“And I can’t afford to be doing work for free … I can’t operate as a charity and it’s quite distressing in a few cases.”