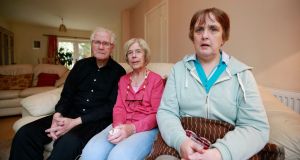 Theresa and Michael Kinsella with their daughter Fiona. Theresa has been diagnosed with dementia but remains Fiona’s primary carer. Photograph: Nick Bradshaw

A woman in her 80s, diagnosed with dementia, has been allowed by the HSE to remain as primary carer to her adult daughter, who has intellectual disabilities.

Theresa Kinsella (82), of west Dublin, along with her husband, Michael (79), has been the primary carer for their daughter Fiona (52) all her life.

Fiona Kinsella, who has intellectual disabilities and will never live an independent life, has been on a waiting list for a residential care placement for 13 years. She attends the Daughters of Charity, St Vincent’s Centre on the Navan Road in Dublin, on a daily basis.

“To be really truthful, I would prefer if Fiona went before me, because then I wouldn’t be leaving her behind when I die,” her mother told The Irish Times.

Speaking about her despair at the continued lack of a placement for her daughter, she said: “I’m worn out. I don’t begrudge what I do, but I am really tired.”

In January, Theresa Kinsella’s consultant at Connolly Hospital, Dublin, wrote to the clinical director of admissions at St Vincent’s Centre. “I had written to you on 4th October 2016 with regard to her ability to care for her daughter Fiona, who has intellectual disability. She [Theresa] has had a significant deterioration in the past six months and now has well-established dementia.”

The letter outlined examples of how her dementia was manifesting itself: she had left the house with the cooker still on, she had got lost “while walking her usual route back from the shops”.

He wrote that since she was her daughter’s carer and “given her very significant dementia and this recent deterioration” he had “serious safety concerns for the two of them should this situation continue”.

On April 7th the private secretary to Minister of State for Disabilities Finian McGrath wrote to Gina Kinsella, another daughter of the Kinsellas who had been attempting to bring the case to his attention.

He said he had just received a HSE update and there were currently no vacancies and it was unlikely Fiona would get a placement due to other clients with “a higher medical priority”.