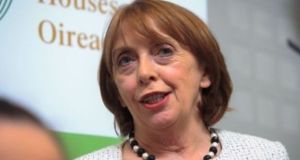 Social Democrats co-leader Róisín Shortall: “The Government has been distracted and their focus has been elsewhere.” File photograph: Collins

The Government has been accused of endangering the re-opening of schools due to its “lax” travel policy and a “chaotic” approach to key issues facing students and teachers.

She said that every possible measure should be put in place to discourage people from travelling to the State. “We haven’t done that, the Government is actually doing the opposite… they’ve been distracted and their focus has been elsewhere.”

The absolute priority has to be to reopen the schools and get our domestic economy up and running, and the only way we’re going to be able to do that is by introducing very strict controls in relation to the threat of the importation of the virus as a result of international travel.”

Aodhán Ó Ríordáin, the Labour Party spokesman on education, called on Minister for Education Norma Foley to come into the Dáil to answer questions on the reopening of the education sector. He said that she had offered to meet with opposition spokespeople on the matter on Tuesday afternoon, but his preference was that the discussion be public.

“We want her to come onto the floor of the house today to answer questions not just on the Leaving Cert but also on the re-opening of schools. It’s gone quite clearly past a joke,” he said on the plinth of Leinster House. The Dublin Bay North TD said clarity was needed on a host of issues, most pressingly a financial package to support re-opening.

With Irish class sizes among the highest in Europe, he said students, teachers, parents, special needs assistants and others need to feel comfortable returning to school. “Nothing can happen in the Irish economy until schools go back,” he said.

“Unfortunately, with the Department of Education, we are just waiting for the next chaotic announcement and that has been the history of this debacle since the Covid-19 pandemic started,” he said.

Elsewhere, the Social Democrats announced their spokesperson portfolios for the new Dáil term. Catherine Murphy will assume responsibility for justice, enterprise, trade, employment and sport, while her co-leader Róisín Shortall will take on the health, finance and public expenditure and reform briefs.

Catherine Murphy said the party will be “a constructive opposition, not afraid to ask the hard questions at the same time” and that the party will advocate for “an even recovery” from the Covid-19 crisis.

Ms Shortall said a row in the party last year over candidate selection, which led to the resignation of several members of the party’s executive board, was a “distant memory”.

“There are teething problems in all organisations but we’re a very united party now,” she said. “We very much look forward to the future.”