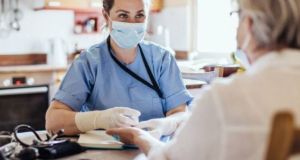 Siptu said the decision of the Department of Public Expenditure and Reform not to permit employers pay their staff as per their roster if they were put on Covid-19 related leave “resulted in significant financial disadvantage being incurred”. File photograph: Getty

Healthcare workers may have failed to declare symptoms of coronavirus out of fear of losing additional overtime or premium payments, an Oireachtas committee will hear on Tuesday.

In a submission to the Oireachtas committee on the pandemic, trade union Siptu said the decision of the Department of Public Expenditure and Reform not to permit employers pay their staff as per their roster if they were put on Covid-19 related leave, “resulted in significant financial disadvantage being incurred”.

The union believes this may have resulted in staff not declaring symptoms to their employer if they knew it would put them off duty for at least 14 days, resulting in loss of overtime and premium pay.

“Our members cannot afford to live on basic salary; therefore mechanisms which are introduced, which result in financial penalties, are subject to a real outcome of potential non-disclosure and a failure to have effective detection systems in place,” the union said in its submission.

The committee will hear on Tuesday from trade unions and the Health Service Executive about the 8,300 healthcare workers – almost a third of all known Covid-19 cases in the State – who have contracted the disease.

In a separate submission, the Irish Medical Organisation has warned that adequate roster arrangements must be put in place to cover workers absent with the virus or who are excluded as potential close contacts of a case.

“Given the [healthcare worker] culture of working when ill, staff going to work while symptomatic with Covid-19 because of their perceived obligations to their colleagues, and weak exclusion policies in some workplaces contributed to larger outbreaks,” the IMO said.

Siptu said there were striking differences between how different categories of healthcare workers who contracted Covid-19 were treated, with supports not available to contract staff “due to their employment not being funded by Government or [by] the direct employer”.

The union said it was told by the HSE that “there was no jurisdiction on the public health service to enforce necessary protections for staff employed by a contractor but providing service on a HSE site”.

Siptu maintained that the Government will not provide a death-in-service gratuity in respect of health service contract workers who died after contracting Covid-19 while on duty.

Dr Glynn described the workplace, and particularly shops, services and supermarkets, as the “new front line”.

The medic used Monday’s National Public Health Emergency Team (Nphet) briefing at the Department of Health to remind workers to keep a physical distance from colleagues. He used the example of the “first significant cluster on a construction site to date” – located in Dublin city centre where more than 20 cases have so far been identified – to warn employers about the continuing risk from the virus. He reported no new deaths from the disease and six new confirmed cases.

Rachel Kenna, chief nursing officer at the department, urged the public to follow public health advice because healthcare workers were not prepared for a second Covid-19 wave in the winter.

“They are tired; they are not ready for another four months like we have just gone through,” she said.

The Irish Nurses and Midwives Organisation (INMO) has told the Covid-19 committee that almost two thirds of nurses who have recovered from Covid-19 were still experiencing post-viral fatigue.

Meanwhile, senior Government sources said the publication of the so-called “green list” of non-quarantine countries is likely to go ahead this week, after discussions at Cabinet. While there is growing caution in Government about any relaxation of coronavirus restrictions, and some senior figures argued to postpone the publication of the list, it is expected to go ahead but with a much reduced list of countries. One senior source said there was “not a chance” of Spain, France and Italy being included on the list, though another source said he expected Greece to be included.

Public opinion research carried out by the Department of Health suggests a high degree of public caution about lifting restrictions, with public concern about the virus rising steadily for the last month and now at the same levels that were last registered in April.

Government sources continue to say the reopening of schools in September remains a priority; Minister for Education Norma Foley is due to meet teaching unions on Tuesday for discussions on the reopening plan.