GPs, nurses, pharmacists and retired people could be used to give Covid-19 vaccine 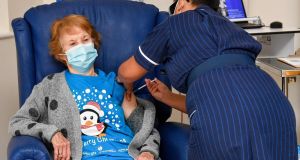 The Government’s Covid vaccine taskforce was expected to issue its plan on the rollout of the vaccines to the Government this weekend.

It is expected the report by the High Level Vaccine Taskforce will recommend all healthcare workers, including GPs, nurses and pharmacists be considered in helping administer the vaccine programme, while sources indicated that recently retired qualified people could be re-employed.

The report was prepared by a high level task force chaired by Professor Brian MacCraith, which first met on November 23rd, with the aim of producing a report by December 11th.

The report will set out a national strategy for the procurement, distribution, and delivery of a Covid-19 vaccine, including the logistics of how the doses will be stored, transported and administered.

The rollout plan outlined in the report is expected to be discussed by Cabinet early on Tuesday.

Members of the task force included chief medical officer Dr Tony Holohan, Health Service Executive CEO Paul Reid, as well as a number of senior civil servants and officials working in procurement and other areas. The group also included external logistics experts, as well as representatives from the IDA and the Defence Forces.

Earlier this week the Government agreed which groups would be prioritised to receive the vaccine once it becomes available.

Residents aged over 65 in long term care facilities, such as nursing homes, frontline health care workers, and people over 70 years of age would be among the first to receive the vaccine.

The rollout of the vaccine will follow approval by the European Medicines Agency (EMA). The European regulator is due to complete a final review of the Pfizer/BioNTech vaccine by the end of December at the latest, which could see the first doses administered in Ireland in January.

The EMA may approve a second vaccine produced by Moderna in early January, after which it would also be administered in Ireland.

The vaccines produced by Pfizer/BioNTech and Moderna must be stored at super low temperatures of minus 80, and minus 20 degrees respectively, and the task force had to examine how these would be stored and transported.

The HSE is already engaged in negotiations with GP groups over winter planning and Covid-specific issues.

Doctors say they are increasingly frustrated over “delay and confusion” about their role in the State’s Covid vaccine plan. Irish Medical Organisation (IMO) GP chairman Dr Denis McCauley said there was a lack of clarity on the role to be played by family doctors.

GPs want to play a role but “the longer our keenness is held on tap, the more frustration will actually develop”, he said.

The expectation on Friday was that both mass vaccination centres and the GP and pharmacist network would be used, while the Government has sought assurances from drug companies manufacturing the vaccine that they were taking a no-trade-deal Brexit into account.

The report from the task force is expected to include guidance on how vaccination records should be maintained, and the uptake of the vaccine tracked.

On Tuesday, 90-year-old Margaret Keenan from Enniskillen became the first person in the world to receive the Pfizer/BioNTech vaccine, after it was approved by British medical regulators.

Meanwhile, senior gardaí are in consultations with the Government’s Covid-19 taskforce on providing security for delivery of vaccines next month. The discussions follow warnings from Europol and Interpol that shipments are possible targets for organised criminals who will seek to sell them on the black market.

No final decision has been made on the extent and nature of the security. It is likely to include physical escorts and the use of intelligence sources to determine threats. It is understood no credible threat to vaccine shipments has been identified to date, although there is evidence from the US of attempts by foreign adversaries to hack into “cold-chain” systems necessary to store the vaccine.