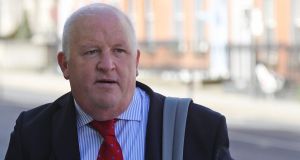 Tadhg Daly of Nursing Homes Ireland: it makes sense if there is a clinic set up to administer vaccines to residents and staff of a nursing home in a rural area to have family members participate too. Photograph: Nick Bradshaw

Inoculating a nominated visitor for nursing home residents as a “vaccine buddy” in the first Covid-19 vaccinations would help their wellbeing, the nursing home sector has said.

The idea of including a family member or friend in the first wave of vaccinations against the coronavirus disease was raised by Nursing Homes Ireland, the representative body for private nursing homes, in a letter to Minister for Health last month and in a follow-up meeting last week.

“We felt that it was important for them to consider this idea of a nominated visitor and that would ultimately mean people could come and go a lot more freely than the current situation,” said Tadhg Daly, chief executive of the industry group.

Mr Daly said that the vaccination programme could be “a complex challenge” and he was unsure how long it would take but inoculating a relative or friend of a nursing home resident could not just keep residents safe but could “address the challenge of resident wellbeing”.

He felt that it would make sense, if there was a clinic set up to administer vaccines to residents and staff of a nursing home in a rural area, to have family members participating in it as well.

“There is strong merit in it,” said Mr Daly.

Nursing home residents, one of the most vulnerable groups to the virus, and healthcare workers in hospitals and care facilities are expected to be among the first to be vaccinated.

The vaccination programme is expected to begin soon with the first vaccine expected from pharmaceutical giant Pfizer and German biotech company BioNTech.

The EU’s drug approval authority, the European Medicines Agency, could approve the Pfizer-BioNTech vaccine at a meeting on December 29th with the vaccine distributed thereafter.

The Health Service Executive has received nine ultra-low temperature freezers that can store between 175,000 and 200,000 doses of the jab, which would be a sufficient number to inoculate 30,000 residents and 30,000 staff in the country’s 568 nursing homes along with thousands more healthcare workers.

Mr Daly said that the Minister was non-committal in his response to the idea, saying that the prioritisation process would be determined by the Government’s Covid-19 vaccine taskforce that is being led by Prof Brian MacCraith, the former president of Dublin City University.

A spokeswoman for the Department of Health said that the order in which people should be offered vaccination “was being developed as a priority in conjunction with the national experts on immunisation” and that it is expected this would be finalised shortly.

She did not remark on the NHI’s “vaccine buddy” proposal.

President Michael D Higgins, who turns 80 in April, will take the Covid-19 vaccine when it is recommended, his spokesman said.

“The President has spoken passionately about the importance not only of vaccines for the global approach to combating the Covid-19 virus, but also of ensuring equitable access for all to the benefits of health technologies,” his spokesman said.

Independent Sligo-Leitrim TD Marian Harkin told RTÉ that a “vaccine buddy” scheme for nursing home residents was “a good idea” because residents had been “very isolated” during the pandemic and had not been able to see loved ones.