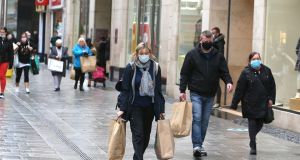 At the start of December, when the six weeks is up, there is no prospect of us arriving at Covid-free Nirvana. Photograph: Stephen Collins

The Government’s plan to move to Level-5 restrictions marks another journey into the unknown with Covid-19.

By moving straight from Level 3 to Level 5 , Ministers are breaking their own promise for graduated, single-level changes in restrictions.

At least now, in contrast to when the National Public Health Emergency Team sought Level 5 two weeks ago, some notice is being provided, the budget is in place and supports are there to cushion the blow.

Yet the move will cause massive economic, social and mental health damage without offering much of a longer-term solution.

It also flies in the face of at least some evidence relating to virus trends. The worsening situation certainly demanded action but arguably not quasi-lockdown .

The obsession with case numbers obscures more important trends around mortality and intensive care. The relentless focus on Covid-19 may lead some to forget that every winter sees a rise in hospital activity.

Over the last week, the number of ICU patients with Covid-19 has increased marginally, from 31 to 34. Deaths, which lag other indicators, have remained at a low level, at least until Tuesday when 13 were recorded.

According to the Health Service Executive, there are more than 352 free hospital beds and almost 30 critical care beds free at present, before surge capacity is considered. The system is “coping but under pressure”, its boss, Paul Reid, said a few days ago.

The five-day average of cases dropped slightly on Monday, for the first time in weeks.

Would a move to Level 4 have minimised additional harms and kept excess pressure off the health service while bending the curve and reducing infections? We’ll never know now, but it wouldn’t matter much if the six-week Level-5 lockdown offered a lasting solution.

The problem is that it doesn’t. At the start of December, when the period is up, there is no prospect of us arriving at Covid-free Nirvana; even under a best-case scenario, it’s likely we will still have hundreds of daily cases.

As a country, we’ll then be at a fork in the road. Either we continue the lockdown right up to and possibly over Christmas or we ease restrictions. If the latter happens, the pre-Christmas shopping season is saved but another lockdown is inevitable in the new year.

And so on, with each successive lockdown destroying the fabric of our society and morale of its citizens.

Though it hasn’t been said, this is effectively the policy until a vaccine arrives. More will be invested in testing and tracing but if this had been done earlier, we might not be where we are now. Despite the denials of Ministers and health bosses, the summer, when cases dropped to low levels, was wasted.

First, we failed to spot the immediate relaxation in people’s behaviours as restrictions were eased. We failed to spot outbreaks in meat plants until it was too late and we reduced testing when it needed to be increased.

Level 5 is yet another blunt instrument uniformly applied to decent people who have been faithfully following the rules in exactly the same way as to those who either don’t care or don’t agree .

Surely non-compliance is a greater issue compared to the economic and social behaviours of people complying? Would curfews, or controls on alcohol off-sales, not have been more effective in tackling this non-compliance?

Dealing with Covid-19 isn’t easy. Ireland is certainly not alone in the challenges. But it would be nice to know, before embarking on six weeks of hardship, that we had a prize in sight. Sadly, other than repeated bouts of restrictions, we clearly don’t.