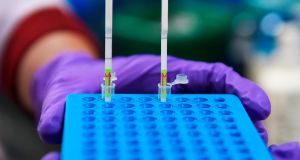 Some rapid tests under development promise to give results at a similar speed of a pregnancy test. Photograph: Money Sharma/AFP via Getty Images

The use of cheaper, rapid tests for Covid-19 as an alternative to the current system has been rejected by the State’s health watchdog.

However, antigen and other alternatives could be used to enhance the current system of PCR testing, according to the Health Information and Quality Authority (Hiqa).

PCR (polymerase chain reaction) testing is regarded as the gold-standard of testing for the virus, but is expensive and time-consuming. Other countries have introduced cheaper testing methods with quicker turnaround and on-the-spot results, but which have lower levels of accuracy.

The provision of widespread rapid testing is seen as an essential prerequisite before widespread international travel can be allowed to resume.

Opposition politicians such as Labour leader Alan Kelly have recently called for the introduction of a rapid testing regime.

In a health technology assessment on alternative tests, Hiqa says it is not possible to provide an “across-the-board” endorsement of specific technologies due to variation in the performance of individual tests.

“The evidence shows that effective testing strategies rely on a portfolio of tests, using different technologies that can be applied in different settings and situations. There is no single test that is suited to all contexts,” according to Dr Máirín Ryan, Hiqa’s director of health technology assessment.

“While testing people at or near the point of care, including with the use of rapid antigen detection tests, has the potential to expand test capacity, reduce test turnaround times and improve access, such tests typically show reduced diagnostic accuracy compared with the current test.”

As a result, Dr Ryan said, results from a rapid antigen detection test may need to be confirmed with the current PCR test, ”depending on circumstances”.

However, clinical validation studies are needed to determine the “real-world” performance of tests. “Before any new test is implemented, it is crucial that these studies are undertaken in Ireland in the settings for which use of the test is planned,” Dr Ryan said.

Hiqa is advising the introduction of “validated” rapid testing in Ireland should now be considered to “enhance” Covid-19 prevention and control. Efficient process with accurate and reliable rapid tests would facilitate timely clinical management of cases and public health measures, it says.

“A cohesive national strategy is needed to ensure the right tests are undertaken in the right people at the right time for the right purpose. Planning now to support delivery of the strategy will facilitate rapid deployment of tests that meet the requisite standards once validated for use.”

The assessment findings were submitted to the National Public Health Emergency Team (Nphet) on October 7th, 13 days ago, and were published on Wednesday.