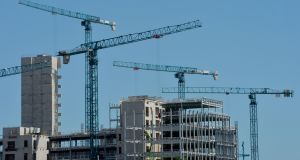 CRH confirmed on Thursday that the pandemic had materially hit its operations. Photograph: Alan Betson / The Irish Times

Building materials giant CRH will slow its normal pace of deal-making as it copes with the uncertain Covid-19 fallout in its main markets, chief executive, Albert Manifold, says.

The group noted that a fall in its surplus from disposals – selling some of its businesses – to $ 9 million (€7.5 million) in the six months ended June 30th from $165 million (€139 million) in the first half of 2019, contributed to the drop in profits.

CRH, which has businesses in Europe, the Americas and Asia, confirmed that Covid-19 had materially hit is operations. Revenues fell 5 per cent to $12.2 billion (€10 billion) in the first half of 2020, from $12.9 billion (€10.8 billion) during the same period last year.

Speaking after CRH published its first-half results, Mr Manifold said that the group had $10 billion (€8.4 billion) in available cash, partly on the back of savings made to combat the impact of coronavirus lockdowns on global construction markets.

He signalled that it would continue with its long-term strategy of growing CRH partly through buying other businesses, despite looming uncertainty.

“We will continue with mergers and acquisitions but at a slower pace,” he said, adding that its pipeline of such deals remained strong.

Mr Manifold added that while earnings in the current quarter, which ends on September 30th, were likely to be in line with the same period in 2019, there was less visibility on what would happen in the final three months of this year.

The figures published by CRH on Thursday cover the period when coronavirus shut down construction in many of the Irish group’s main markets.

Mr Manifold explained that the impact of the shutdowns varied from region to region. They hit heavily in many parts of western Europe, but less so in the eastern half of the continent.

Barring the northeast and Pacific northwest, shutdowns failed to slow activity in much of the US, where construction was largely treated as a critical industry, Mr Manifold noted.

CRH cut $200 million (€168 million) in fixed costs and the same amount from capital spending during the first half in a bid to tackle the crisis.

Mr Manifold said in a statement that the outlook for the rest of this year and into 2021 “remained uncertain and is dependent on an improving health situation across our markets”.

The group said it would maintain its interim dividend at 22 cent a share, which it will pay to investors next month.

In March, CRH returned $220 million (€185 million) to stock holders when it completed a share buy-back programme.

Combined with the dividend paid to shareholders in first half, that brought to $800 million (€674 million) the total that it returned to backers in the first half of this year.

Overall, the Irish company has returned $2 billion (€1.6 billion) to backers since it began repurchasing shares in May 2018.

CRH shares closed 1.86 per cent down at €32.79 on the Irish Stock Exchange on Thursday.

1 Chris Johns: Boohoo exposed on pay and conditions in digital economy
2 In this strangest of recessions, what happens next for Ireland?
3 Hotel bookings collapse in wake of additional Covid restrictions
4 Qatar Airways got €1.7bn government lifeline after losses widened
5 Should I switch bank now with Ulster Bank at risk of closing?
6 Online shopping makes town centre jobs unviable, says Next boss
7 Michael O’Leary is the boss you want to lead an airline out of crisis
8 FBD changes wording of business insurance policies amid fight over virus payouts
9 Estée Lauder staff at Dublin airport plan further strike action
10 Air travel never going ‘back to way it was’
Real news has value SUBSCRIBE