December 1st, 2015: An animation shows the plans currently in place for the proposed children's hosiptal to be built on the site of the current St James’s Hospital. 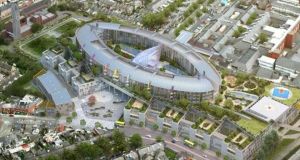 Proposed children’s hospital at St James’s: rising costs in the construction sector is being blamed for most of the projected increase in the facility’s price tag

The contract to build the long-awaited national children’s hospital in Dublin has been awarded – at a price €300 million more than the original budget of €650 million.

BAM Ireland, one of the State’s largest building contractors, has been selected as the preferred bidder to build the hospital for a price understood to be close to €1 billion, The Irish Times has learned. This does not include the cost of IT or equipment for the hospital, which is likely to exceed €100 million in each instance.

The decision, which was disclosed to the company on Friday, is subject to a 14-day cooling off period to allow for objections or other legal issues. BAM submitted the lowest bid of the four companies on the shortlist.

The steep rise in the projected cost of the project presents the Government with a challenging decision, given the competing demands for health spending and continued opposition to the St James’s site in some quarters.

A previous government committed to spending half the proceeds of the sale of the National Lottery to the project, but the €200 million this provided falls well short of the projected cost. Building the hospital, and moving the Central Mental Hospital to north Dublin, will consume most of the HSE’s capital budget over the coming years, unless additional funds are made available.

The decision on whether to finally go ahead with the project will be made by Cabinet, probably in the coming weeks, after Minister for Health Simon Harris presents a formal memo on the issue.

The price has risen steadily since a planning application was lodged in 2015, when it was expected to cost €650 million.

Rising costs in the construction sector, driven by an improving economy, is being blamed for most of the projected increase. Building inflation has risen from 3 per cent when the project was mooted at St James to almost 9 per cent, according to a recent-published industry analysis.

With construction expected to take four years, the new hospital would be ready to open its doors by 2021, provided the Government gives the go-ahead.

The amalgamation of the three Dublin children’s hospitals under one roof was first mooted in 1993, but has been subject to repeated delays. An earlier attempt to build the project at the Mater hospital foundered when planning permission was refused.

St James’s was chosen as the preferred site by the last government in 2012 and planning permission was granted last April. An alliance of child-patient groups and retired paediatricians have campaigned vigorously about the plan, saying the hospital should be located on a greenfield site near the M50. Opposition has largely focused on traffic and parking issues at St James’s.

Speaking in the Dáil last week, Mr Harris defended St James’s as the location Pointing out that an entire generation of children who were supposed to benefit from the hospital had not had an opportunity to do so, he said his priority was to make progress as soon as possible.

Mr Harris said 1,000 parking spaces would be provided for families and staff at St James’s and pointed out that Great Ormond Street children’s hospital in London is not located on a greenfield site.

Speaking when planning permission was granted last year, former minister for health Leo Varadkar said funding was in place and “short of an asteroid hitting the planet”, the hospital would be built by 2020.