HSE admits it has concerns about 9,000 inpatients not included on national waiting lists 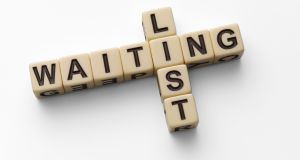 There are 62,066 patients on a Planned Procedures list, which is not published.

In addition, “a small number” of patients – more than 1,000 – who were taken off the waiting list after receiving appointments within a six-week timeframe were not actually seen in that time. Where operations or other procedures are cancelled, hospitals prioritise affected patients by rescheduling them as soon as possible, according to the HSE.

An RTÉ documentary broadcast on Monday night claims the number of patients waiting for operations or medical procedures is considerably higher than the numbers published by the National Treatment Purchase Fund.

Living on the List follows a number of patients who have been waiting months or years for an appointment.

At the end of last December, there were 81,015 patients on the published NTPF inpatient list. Separately, there are 62,066 patients on a Planned Procedures list, which is not published. These patients require follow-up treatment, including surgical pin removal, cataract removal, hip replacement and corrective spinal surgery, and are given an indicative future date or timeframe to return to the hospital.

The programme claims many of these dates are not delivered on by hospitals.

The NTPF says 48,774 of these appointments are for follow-up endoscopies, and occur when, for example, a patient is told to come back for another test in a year’s time.

Other appointments on this list relate to patients whose procedure has been delayed because they have developed another condition that requires priority treatment. Almost 9,000 on the Planned Procedures list are waiting longer than they should be, it says.

A second unpublished list, known as the Pre-Admit or “To Come in” list, has 22,927 patients. These are patients who have been given a date for treatment within six weeks. The NTPF says 85 per cent of these patients are seen within that time.

However, in the UK, the National Health Service defines waiting time as ending when a patient’s treatment begins, rather than when an appointment is scheduled.

For outpatients, the NTPF includes the To Come In patients in the published lists, because the majority of appointments are on a longer timeframe than six weeks.

The fund says its published data excludes patients on the two lists “in line with international best practice,” including systems in Canada and Sweden, though it is currently examining this.

Opposition politicians called for clarity on the issue from Minister for Health Simon Harris. Sinn Féin health spokeswoman Louise O’Reilly claimed the waiting lists presented to the public were “purposefully edited and unreflective of the true realities of the Irish healthcare system”.

Fianna Fáil health spokesman Billy Kelleher called on the Minister to direct the NTPF to provide an “accurate, clear and complete picture of the real state of waiting lists right way”.

The HSE says six out of 10 patients on the inpatient waiting list are seen within six months and only 2 per cent wait more than 18 months. It has apologised to any patient who has had a poor experience with waiting times.

One of the patients featuring in the programme is Darragh, a seven-year-old boy with scoliosis. His condition has deteriorated steadily over the past year and the deformity of his spine has seriously encroached upon his lung function making breathing difficult.

Another patient, Betty, has a painful and debilitating spinal problem. Her quality of life has drastically diminished as she struggles to cope with the pain.

Patricia has a painful and intrusive gynaecological condition which makes day to day life a struggle. She has been waiting two years just to have her condition diagnosed. When she receives a diagnosis she could wait another 18 months to receive treatment.