Dáil to debate recommendation of abortion committee in January 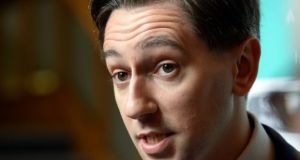 Minister for Health Simon Harris said he has changed his personal opinion on abortion.

Minister for Health Simon Harris has repeated his personal view that he supports the recommendation by the Oireachtas Committee that abortion should be available up to 12 weeks.

Three days of debate on the Committee’s report will be held when the Dáil resumes in January he told RTÉ’s News at One and the matter will also be discussed by the Cabinet.

The Minister’s department is preparing draft legislation to cover whatever option on which the Government decides.

He said he had changed his personal opinion having spoken with families who had experienced fatal foetal abnormality along with the Savita Halappanavar case and the experience of Amanda Mellet.

Mr Harris said it was important to have a respectful debate. “This is about people facing difficult scenarios and choices.” The Minister added “this is not a party political issue. It is very personal.”