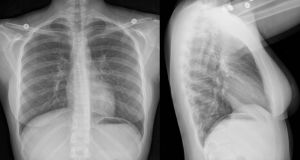 Tralee solicitor Damien Cashell has confirmed that systems failings in the radiology department going back to 2014 were identified and were to be rectified. Photograph: iStock

“Substantial damages” were paid to a woman whose breast cancer was missed and her diagnosis delayed because of errors in the radiology department in University Hospital Kerry, it has emerged.

The misdiagnosis took place two years before the current review, which got under way in October. The case was settled in September.

A major review of the period between March 2016 to July 2017 is ongoing. A team of external radiologists is midway through a trawl of more than 46,000 scans, X-rays and ultrasound examination imagery at the hospital involving almost 27,000 patients after seven serious cancer misdiagnoses came to light this summer.

However, Tralee solicitor Damien Cashell has confirmed that as part of the proceedings he was involved in, systems failings in the radiology department going back to 2014 were identified and were to be rectified.

The delay in his client’s diagnosis meant the cancer had advanced significantly and his client is still undergoing treatment for the cancer, for which she had been given the all-clear.

Her primary reason for bringing the case was to ensure systems in place at the time would change and she was devastated to learn this week that problems persisted, Mr Cashell said.

“A full internal investigation took place which acknowledged the failings in the system. High Court proceedings issued and the case settled,” he said.

“Unfortunately it appears that this case, and others like it, did not prompt sufficient change.”

He has dealt with other cases concerning the radiology department and “I continue to deal with a number of cases of misreading of scans leading to delayed diagnosis of cancer”, he said.

“It is a very unfortunate set of circumstances for those involved and it highlights how the system and those working in it are over-stretched,” Mr Cashell said.

The solicitor added that while the hospital appeared to be doing everything in its power to remedy matters, these errors were affecting people’s lives in a serious way.

The scan in question was not read correctly, and his client was given the all-clear. There were problems with filing and with notification, he said.

The current review, which is one of the biggest ever in the State, concerns the work of an individual consultant radiologist who is no longer working at the hospital, but who was a locum working full-time there during the review period.

Seven serious cancer cases were found to be missed or misdiagnosed and the three that set off alarm bells became apparent within a short time of each other in late July.

As of Thursday, some 34 patients have been recalled for a repeat of scans and ultrasound procedures but no major discrepancy has been found.

The errors recorded so far are well below the accepted range of 3-5 per cent for individual radiologists.

Meanwhile, there are persistent questions over the workload on the radiologist concerned. Public representatives have warned against “scapegoating” an individual.

The workload equated to 150 reports a day or 3,000 a month. If all five consultant radiologists performed at the same rate everyone in Kerry would be scanned, the TD Danny Healy-Rae said.

Radiographers’ representatives have also warned about major staffing problems in the department.

The HSE has confirmed that radiologists, rather than radiographers which are not at doctor grade, regularly carry out ultrasound examinations at the hospital because of the volume of work and “backlog”.

The HSE has defended the size of the radiology team – there were five consultant radiologists – at the Kerry hospital, saying it is commensurate with the needs of an acute hospital of its size. However, it has also conceded at a briefing that radiology work was being outsourced due to work pressure.