Record number of transplants took place in Ireland over past year 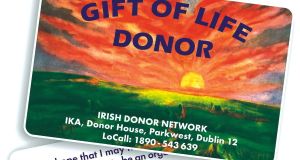 More members of the public should carry donor cards, according to a leading transplant surgeon.

New figures from the Department of Health show a record number of organ transplants took place in Ireland in 2017.

Irish hospitals carried out 308 transplants so far this year, 28 more than last year. These were: 190 kidney, 61 liver, five pancreas, 36 lung, and 16 heart transplants.

Prof Egan told RTÉ’s Morning Ireland that he welcomed the increase in live donations and the overall enhanced donor rates.

He said the national lung transport programme in Beaumont Hospital is the third largest (per capita) in Europe.

He added that while public awareness of organ donation is important the infrastructure in intensive care was “a key part of the jigsaw.”

Minister for Health Simon Harris also announced the publication of a report on the public consultation for a proposed Human Tissue Bill. The report showed that a large majority of respondents agreed with a proposed opt-out system for organ donation.