Number of cases in community is high, and expected to rise steeply this week 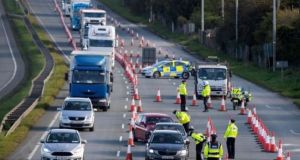 The Government may look to reintroduce the 5km travel limit. File photograph: The Irish Times

The Government may be forced to implement full Level 5 Covid-19 restrictions because of serious concerns about the number of people being hospitalised with coronavirus and the high positivity rate of those being tested for the disease.

The number of people being hospitalised with coronavirus has “increased sharply” in the last two days, as the first effects of the third wave of the virus begin to hit the healthcare system.

Dr Tony Holohan, the State’s chief medical officer, said the “concerning trend” of increasing hospital admissions reflected the “sharp increase” in the rates of Covid-19 seen in the last 10 days. “We have now exceeded the cumulative number of people hospitalised in this third wave than in the second. Hospitalisations have increased sharply in the last two days,” he said.

A senior Government source said tighter restrictions were not discussed at Monday’s Cabinet meeting but that “you couldn’t rule out the Government taking further action in the coming days if the situation continues to deteriorate”.

“We’re at Level 5 with a few tweaks and it’s county and not 5km,” travel limits, the source said. “While we’re seeing much lower numbers today and yesterday Government is being told that is very much artificially low” because of the time of year, and there is an expectation that we’ll see very, very high figures later this week,” the source said.

It is understood Dr Holohan reiterated his view to Minister for Health Stephen Donnelly prior to the Cabinet meeting that full Level 5 restrictions may be required, with more people in hospital now at the start of the third wave than at the peak of the second wave of the virus.

Dr Holohan said public health officials were also concerned by a “steep rise in the positivity rates” from community testing, a metric indicating how prevalent the virus was among the general population.

The current seven-day average rate of positive tests had risen to 9.2 per cent, up from 5.2 per cent on December 18th. “This is just one more reason why we are strongly advising everyone to stay safely at home to avoid transmitting or catching this virus, as it continues to circulate widely,” he said.

A further 765 confirmed Covid-19 cases were reported by the National Public Health Emergency Team on Monday, as well as one further coronavirus related-death.

Dr Holohan said the drop in new cases compared to last week was likely due to fewer people being referred and turning up for testing in the days around Christmas.

Infectious diseases expert Prof Sam McConkey said he was concerned this would result in “significantly high” numbers of cases being reported from the middle of this week onwards. Prof McConkey said the increase in hospitalisations was “almost completely inevitable” given the country was beginning to see over 1,000 new cases a day.

The first Covid-19 vaccinations are expected to be administered at one of four acute hospitals today in Dublin, Cork and Galway.

Mr Donnelly updated the Cabinet on the vaccination plan and stressed to colleagues the importance of effective communications on the vaccine.

The Minister had earlier on Monday met the high-level taskforce on the vaccination programme and told it the only constraint members should face is supply, and that whatever resources they need will be in place.

But concerns were expressed that the vaccination programme was happening with a backdrop of very concerning virus figures and worry about the new strain of the virus.

A number of Cabinet members sought assurance that as supply “ramps up” health authorities will be able to match that with sufficient personnel in place to administer injections, and that there would not be a significant time lag between the vaccines arriving and people being vaccinated.

Mr Donnelly assured colleagues that inoculation would be a full seven-day operation and not a five-day system as has been suggested. He reiterated the only constraint would be supply and all resources would be in place.

The Minister also assured Cabinet that they were engaging with GPs and pharmacies after a number of Ministers expressed concern that different GPs were out raising questions about the pace of vaccines and the importance of engaging with them.

It is also expected a decision may be taken on Tuesday over whether to extend or drop the ban on flights and ferries from Britain into Ireland, one Government source said.

The travel ban had been put in place over fears of a new Covid-19 variant identified in southeast England, and last week the ban was extended until December 31st.

The new Covid variant, which is believed to be significantly more transmissible, has since been detected in the Republic.

Dr Mike Ryan, World Health Organization (WHO) health emergencies executive director, said Britain should not be “unnecessarily punished” for alerting the world to the new strain of the virus it identified.

Speaking at a WHO press briefing on Monday, Dr Ryan said “shutting down countries with absolute measures” was not feasible, or necessarily the best public health response. “It’s really important that transparent and open countries, like South Africa and the UK, who pursue science on behalf of us all, are not unduly and unnecessarily punished for their openness,” he said.

Taoiseach Micheál Martin on Monday said he was really concerned about the new variant of Covid-19 and its possible impact on Ireland. Speaking before a special Cabinet meeting he said rapidly rising numbers of Covid-19 cases in the run-up to Christmas were also of concern.

Mr Martin also defended the new measures the Government has introduced in the face of rising Covid-19 levels. “We have introduced very severe level 5 measures,” he said.

“The only areas not covered are non-essential retail, the impact of which has been shown to be not huge, and [the decision not to reintroduce] the five-kilometre from home restrictions.”

The Taoiseach said a lot depended on behaviour, individual and collective. “That is the key,” he said, adding reducing social contacts, wearing masks, and observing other public health protocols were the best way of keeping numbers down.