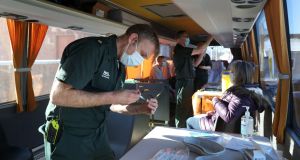 Paramedic Andrew Parker prepares a vaccine inside a holiday coach near Inverness, Scotland, which is being used as a mobile coronavirus vaccination centre. Photograph: Andrew Milligan/PA Wire

Vaccination led to a massive reduction in the risk of Covid-19 patients who had received one dose needing to be hospitalised in Scotland, according to the first study of the real-world impact of Covid vaccines in the UK.

Four weeks after the patients had gotten their first vaccine dose, hospital admissions had dropped 85 per cent among Covid patients who had been given the Pfizer/BioNTech vaccine, according to the research led by Public Health Scotland.

For the AstraZeneca vaccine, the reduction was even greater, at 94 per cent.

Both vaccines require the administering of two doses, with maximum efficacy not achieved until a few weeks after the second dose.

Among over-80s who had received one of the vaccines, there was an overall 81 per cent reduction in hospital admission risk in the fourth week.

The researchers did not look at the impact of the vaccines on transmission – ie whether people who were vaccinated continued to pass on the virus – or whether immunity waned over time.

The preliminary data covers 1.14 million vaccinations given in Scotland between December 8th and February 15th.

The study looked at the numbers being admitted to hospital with Covid among this population and compared it with those admitted who were not vaccinated.

Early indications from the Irish vaccination programme, which is less advanced in terms of progress made than in Scotland, show a bigger than average fall in Covid-19 cases among hospital workers, who were among the first to be inoculated.