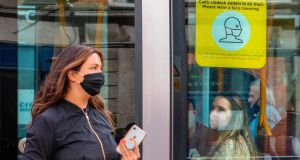 In May the group recommended against the use of cloth face masks, which was ultimately over-ruled. Photograph: Paul Faith/AFP via Getty

A group set up to provide independent scientific advice to the Government about Covid-19 has been stripped of its main function.

Although the Expert Advisory Group, a subcommittee of the National Public Health Emergency Team, will continue to meet, it no longer has responsibility for approving advice and guidance on Covid-19 preparedness, as set out in its terms of reference.

The group was set up at the start of the pandemic in February with a mandate to be “an important source of independent, ongoing expert advice and support in public health emergencies”.

It is chaired by Dr Cillian de Gascun, director of the National Virus Reference Laboratory, and its membership included a mix of scientific and medical experts from the health service.

Whereas the membership of the National Public Health Emergency Team is dominated by personnel from the Department of Health, the HSE and other State agencies, the Expert Advisory Group’s membership included a number of consultants and a patient representative, Damien Nee. However, Mr Nee resigned in early August over a rise in virus cases in meat plants and direct provision.

At times, the group’s advice has run counter to wider scientific sentiment and has been over-ruled by NPHET or the Government, such as in May when it recommended against the use of cloth face masks on effectiveness grounds but came down in favour of medical masks. Ultimately the Government implemented compulsory wearing of face-coverings of any type in retail and transport settings.

The Health Information and Quality Authority will from now on have the role of providing guidance on scientific issues to the emergency team, and will draw on the expertise of members of the Expert Advisory Group where required.

The Department of Health said the change resulted from a review of the response to Covid-19 by NPHET as part of moves from a short-term emergency response to a more medium-term approach.

Dr de Gascun said the group was not being disbanded “as such. It’s just a change in the way we work so it’s more sustainable.

“Now that we have a growing evidence base for Sars-CoV-2, the plan is that we will work more closely with Hiqa and input into their evidence summaries and scoping reviews.”

Back in February not much was known about the new virus and officials were more reliant on expert opinion, he noted.

“It should be a more efficient approach, as we will call in individuals with expertise relevant to the specific question under review rather than have to bring everyone to every meeting.”

The group will meet again later this month, the department said.