Covid-19: Restaurant industry left ‘in a vacuum of the unknown’- RAI 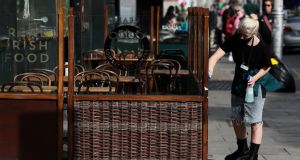 A worker cleans the outdoor dining area of a restaurant in Dublin’s city centre before the further restrictions were introduced last weekend. Photograph: Brian Lawless/PA Wire

The chief executive of the Restaurants Association of Ireland has said that National Public Health Emergency Team (NPHET) cannot prove that the hospitality sector is contributing to the rise in Covid cases.

Adrian Cummins argued the problem lies with contact tracing and said the restaurant industry had been left “in a vacuum of the unknown”.

“If there is spread from the hospitality sector, how come staff haven’t got it?” he asked on Newstalk Breakfast.

Mr Cummins said if cases continue at the current rate, even with further restrictions in place, it would show the hospitality sector was not the problem.

The restaurant association has called on the Government to publish the international evidence relied on by the Cabinet to support the decision to ban indoor dining in restaurants, cafes and food-serving pubs in Dublin.

The restrictions on indoor dining were imposed in Dublin last week as an additional restriction on top of the Level 3 measures under the Government’s new five-level alert system in an attempt to suppress the rising number of Covid-19 infections in the capital.

Mr Cummins said on Monday that business owners wanted to see the international evidence which shows the virus is spreading in restaurants. He called on the Government to “fix” the contact tracing data in order to give confidence to businesses and employees across the country.

There were 50,000 people out of work because of the latest restrictions on the hospitality sector, said Mr Cummins, and some businesses were fearful that they may not survive the three-week period during which they cannot serve customers indoors.

Prof Philip Nolan, chair of NPHET’s epidemiological modelling advisory group, said at the weekend that the ban on indoor dining in Dublin restaurants and bars was justified as cases of the disease were originating in these environments before spreading to people’s homes.

While the disease was “amplifying” through community transmission in people’s households, there was “more than sufficient evidence” that Covid-19 was originating in congregated social settings such as bars and restaurants, he told RTÉ’s Saturday with Katie Hannon.

Prof Nolan said it was a “misinterpretation of the numbers” to say there were lots of cases in family homes but very few cases in other congregated settings.

“If there’s one case in a restaurant that will lead to four or five infections. That could lead to three or four households and 15 to 20 cases,” he said. There was “compelling international evidence” that indoor dining and congregation were “major drivers of community transmission”, he continued.

Prof Nolan later clarified these remarks by saying public health doctors “would track down the source if they had the resources to do so, but they don’t”.