Minister says virus ‘hasn’t gone away’, as Leaving Cert to be cancelled

Minister for Health Simon Harris opens a new Covid-19 assessment hub at the Mater hospital in Dublin to work specifically with marginalised groups in the inner city. Video: Kathleen Harris 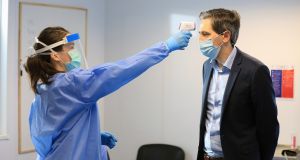 A further 27 people have died from Covid-19, bringing the total to 1,429, according to new figures from the National Public Health Emergency Team.

Speaking earlier on Friday, Minister for Health Simon Harris said progress is being made in nursing homes to fight the spread of Covid-19 but it remains an “area of concern”.

Mr Harris said it is “a tragic fact” that many people have died of the virus in Ireland and “many of them have been in nursing home facilities”.

The Minister was speaking to reporters on Friday morning at the opening of a Covid-19 community assessment hub for vulnerable groups at the Mater Hospital in north Dublin.

“In relation to the issue of nursing homes, there’s no doubt that in this country as has become the situation across largely the world, we have seen particular challenges in relation to long term residential care facilities,” he said.

Mr Harris said he was encouraged by the large-scale testing programme of staff and residents at long term residential care facilities and that he is continuing to engage with Nursing Homes Ireland and Hiqa.

“Many nursing homes that have Covid-19 are handling the situation extremely well, are working very hard. An outbreak in and of itself is not a sign of failure in that nursing home,” he added.

The deaths of another 27 patients were announced by the National Public Health Emergency Team (NPHET) at its briefing on Friday.

On Friday Mr Harris opened a new Covid-19 assessment hub at the Mater Hospital in Dublin to work specifically with marginalised groups in the inner city.

Some 58 per cent of Roma who have undergone testing, and 43 per cent of Travellers, have had a positive result, according to official figures.

The overall positivity rate for all people tested has fallen to under 4 per cent.

The new hub includes a mobile unit to test and treat marginalised groups across the inner city, and will be able to deliver test results in under an hour.

The situation in meat factories, detention centres and other locations where virus “hot-spots” have been identified will be examined by the NPHET at its meeting today.

The Minister said he could not confirm whether he had received a protected disclosure from a staff member at St Mary’s nursing home in Dublin’s Phoenix Park. St Mary’s is one of the worst-hit nursing homes in the country with 24 confirmed coronavirus deaths.

A staff member made a protected disclosure alleging shortcomings in the facility’s response to Covid-19 earlier this week.

“I think it’s very important that anybody that ever has a concern or view comes forward and makes that information available to the authorities.”

He said there were encouraging signs in terms of hospital and ICU admissions but warned “this virus hasn’t gone away”.

The Minister said that anyone currently flying into the State is required to fill out a passenger locator form and asked to self-isolate for two weeks and disclose where they are self-isolating.

“At the moment that’s being done on an administrative basis and we are now looking at putting that on a regulatory footing so that it becomes mandatory,” he said.

Mr Harris also said that Ireland needs a “new Government pretty quickly” and that “a massive challenge” lies ahead in terms of rebuilding society and the economy.

“We need a Government in place with a Dáil majority, with a clear programme and with a degree of certainty that this could last four or five years to begin to tackle some of those issues.”

Mr Harris also said he hopes today will bring “certainty and clarity” for Leaving Certificate students and their families. His comments come as Leaving Cert exams are set to be cancelled and replaced with a “Plan B” in which students will be awarded grades based on their classwork.

Students who are unhappy with their awarded grades will likely be given the option of sitting written exams at a much later date, possibly until January 2021.

Meanwhile, Chief Medical Officer Dr Tony Holohan said on Friday there is “very little prospect” of bars and pubs opening in June due to the difficulty in adhering to restrictions necessary to maintain physical distancing.

Speaking on RTÉ’s Today with Seán O’Rourke show Dr Holohan also said NPHET is to discuss additional measures regarding travel into and out of Ireland to examine if any changes need to be made to that specific aspect of the coronavirus plan.

Travel remains a challenge, he said and the recommendation remains that people avoid all non-essential travel both off the island and back into Ireland.

The issue will be discussed at an NPHET meeting today along with compulsory quarantining.

Dr Holohan said advice will be given to the Government subsequent to the NPHET meeting, but he said social distancing will continue to be the “challenge”.

The country is doing well, he said. “We’re holding. We’ve managed to suppress the spread of the infection,” but there had been an impact among vulnerable groups and in nursing homes.

Dr Holohan also said it was necessary to leave three weeks between each phase of easing of restrictions to allow enough time to see if something not predicted in terms of the virus was picked up, he said.

Taoiseach Leo Varadkar has said it was unlikely the public would be asked to wear masks consistently when outside the home, but it could be a possible requirement in enclosed spaces such as public transport or shops.

Speaking on the Pat Kenny Show on Newstalk, Mr Varadkar said that the pandemic unemployment payment and wage subsidy scheme would continue beyond mid-June.

While the schemes “can’t last forever”, withdrawing them would have to be done in a gradual way.Exact details of how the schemes will continue have not been worked out yet, he added, the Government will make their plans clear before the end of May.